The House Jan. 6 Committee was sued by a freelance photojournalist after it subpoenaed her phone records.

Harris photographed the events at the Capital on Jan. 6. Her images appeared on CNN, Rolling Stone, Vanity Fair, and Politico. She has credentials from the New York Police Department and is a member of the National Press Photographers’ Association.

Last month, the Committee subpoenaed Harris’s phone records for a period of three months ending on Jan. 31, 2021 from Verizon Wireless.

“During the time frame of the Verizon Subpoena, Harris was a journalist acting in a news gathering and news disseminating capacity. She was documenting Tarrio and the Proud Boys and used her phone to communicate with confidential and nonconfidential sources in support of that story,” the lawsuit contends. “Therefore, the telephone records sought by the House Select Committee contain information sufficient to reveal the identities of Harris’ confidential sources and are absolutely protected.”

Verizon Wireless intended to comply with the request until Harris filed her suit.

Harris said in the suit that she lost her phone during the events in D.C. and recovered it after a member of the Proud Boys left it at a hotel desk. She also maintains she did not enter the Capitol.

“The subpoena appears to have targeted Harris’ phone number and not to seek the content of her texts or emails,” Politico report. “It is unclear whether investigators knew the number belonged to the photojournalist before they sought the call and text-related records, but leaders of the probe have emphasized that they seek such records based on phone numbers, not identities.”

In addition to her “rights as a journalist” under the First Amendment, Harris argues that her “protection under the D.C. Shield law” as well as “her Fourth Amendment right against unlawful search and seizure” were violated by the subpoena.

The legal order would “would also impermissibly intrude on her protected newsgathering activities, deprive her of future opportunities to obtain confidential information from confidential sources, and expose her to possible threats of bodily harm from those whose numbers would be so exposed by disclosure of her call detail records,” per the lawsuit. 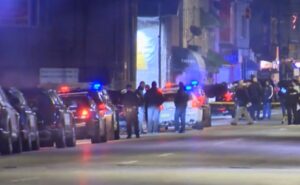