Pharmaceutical Maker Prohibited From Marketing To Doctors in Person

A Massachusetts pharmaceutical company has been banned from marketing to doctors after allegedly misrepresenting one of its medications.

Attorney General Maura Healey announced the settlement on Dec. 16. Collegium Pharmaceuticals will pay a $185,000 fine in addition to ending its in-person marketing to prescribers.

The company allegedly told doctors its product Xtampza was a safe alternative to opioids. However, the product used the same active ingredient as opioids, including Oxycontin.

“Drug companies should not be going into doctors’ offices deceptively marketing addictive drugs as we work to combat a growing opioid epidemic in our state,” Healy said in a statement.

The company is also prohibited from relaunching its sponsorship of “speaker programs” where Xtampza was promoted by doctors to other health care professionals. The program was ended in 2018.

“Investigators found that Collegium sales representatives arranged face-to-face meetings with physicians and other medical workers to promote the drug more than 5,000 times since May 2016,” reports U.S. News & World Report. “Healey’s office says the representatives made misleading claims about the drug’s risks and improperly marketed it to treat acute pain.”

The Stoughton, Massachusetts-based company will also be required to disclose how many doses of its opioid are sold each quarter, both in the state and nationally.

According to a statement from the Attorney General’s office, the publication of “real-time information” about the company’s opioid sales “can be used by policymakers, advocates, and journalists monitoring the opioid epidemic.”

The marketing of opioids is considered by many health care professionals to be a significant contributor to the increase in opioid addiction in the U.S.

“Despite the knowledge of a widespread opioid overdose problem in America, the marketing of opioids has continued unabated,” said Boston Medical Center pediatrician Scott Hadland in a 2019 interview with The Brink.

“The practice of medicine can self-regulate by avoiding marketing interactions, but I think an important option on the table is for pharmaceutical companies to decrease and stop marketing opioid products altogether,” Hadland said. He added that “one in 20 adolescents who are prescribed an opioid after surgery will go on to have long-term issues with that medication.” 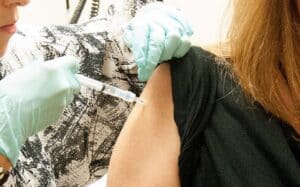