The human-sized caricatures have been entertaining crowds at Progressive Field for years.

Onion, Ketchup, and Mustard are occasionally joined by Bacon.

Warming it up for February, Cleveland! 🏆 pic.twitter.com/5YOpNgWT32

In a letter to Tribe general manager Mike Chernoff on Monday, People for the Ethical Treatment of Animals (PETA) offered to “buy the Veggie Dog’s costume and veggie dogs (sold in your stadium) for all the players” should the team agree.

PETA President Ingrid Newkirk said in the letter, “Pigs, cows, and turkeys used for hot dogs value their lives and don’t deserve to become a stadium snack, so let’s go to bat for them… PETA hopes the team will introduce a delightful vegan wiener in a win for animals, the environment, and the health of its fans.”

“We hope you’ll take this opportunity to step up to the plate by giving vegan fans someone to cheer for in your Hot Dog Derby and representation in Tribe Hot Dogs’ community outreach,” she wrote.

Newkirk also noted that Progressive Field is ranked among its 10 vegan-friendly ballparks in 2019 and that meat-free dogs are already sold at the stadium.

According to The Blaze, “PETA has been mocked and ridiculed in the past for the pro-animal demands. In 2020, they objected to U.S. Marine training that included drinking snake blood and eating live scorpions, and demanded that the jungle survival training use virtual and vegan alternatives. In January, the group objected to the use of animal names as insults and offered a list of replacement words so that animals aren’t denigrated by being rhetorically connected to a lack of character and virtue.”

PETA argued that the move would “continue that spirit of inclusivity” that the team had demonstrated with their plans to change the team name. The team announced that next season they would be dropping Indians and become the Cleveland Guardians.

Despite the press conference and publicity, the baseball team may be in violation of copyright and trademark law. There is an established men’s roller derby team already known as the Cleveland Guardians.

Did the Cleveland Guardians also forget to check Instagram?

This roller derby league stands to make a lot of money if it plays this right. https://t.co/srejzGFJOX pic.twitter.com/P8nrLD5BTc

PETA provided a mockup of the potential Veggie Dog costume. The Cleveland Indians have not publicly responded to the organization’s request. 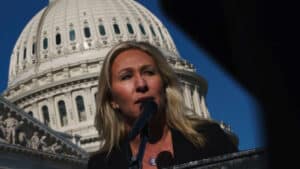 Rep. Marjorie Taylor Greene Suspended From Twitter for One Week Over 'COVID Misinformation'