The Pentagon has announced that they are launching a new unit to investigate Unidentified Flying Objects.

According to a press release from the DoD, “the AOIMSG will synchronize efforts across the Department and the broader U.S. government to detect, identify and attribute objects of interests in Special Use Airspace (SUA), and to assess and mitigate any associated threats to safety of flight and national security.”

“Incursions by any airborne object into our SUA pose safety of flight and operations security concerns, and may pose national security challenges. DOD takes reports of incursions – by any airborne object, identified or unidentified – very seriously, and investigates each one,” the statement continued. “This decision is the result of planning efforts and collaboration conducted by OUSD(I&S) and other DoD elements at the direction of Deputy Secretary Hicks, to address the challenges associated with assessing UAP occurring on or near DOD training ranges and installations highlighted in the DNI preliminary assessment report submitted to Congress in June 2021. The report also identified the need to make improvements in processes, policies, technologies, and training to improve our ability to understand UAP.”

Earlier this year the U.S. intelligence community confirmed that there has been a number of UFO sightings, but admitted it could not explain their appearance.

There have been 144 UFO sightings reported by government sources since 2004.

“Since then, the frequency of these incidents only appears to be increasing,” he continued. “The United States must be able to understand and mitigate threats to our pilots, whether they’re from drones or weather balloons or adversary intelligence capabilities. Today’s rather inconclusive report only marks the beginning of efforts to understand and illuminate what is causing these risks to aviation in many areas around the country and the world.” 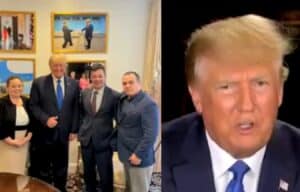 Trump Meets With Rittenhouse at Mar-a-Lago, Says He is a 'Nice Young Man' (VIDEO)