For every Republican voter who has reregistered as a Democrat, four former Democrats have become Republicans

Pennsylvania’s Democratic Party is losing advantage as a growing number of former members register as Republicans ahead of the 2022 Midterm election.

In addition to filling 17 seats in the House, Pennsylvanians will elect a new U.S. Senator to fill the seat vacated by retiring Republican Senator Pat Toomey.

Data analyzed by Reuters indicates that Republicans are converting former Democratic voters at four times the rate of Democrats pursuing registered Republican voters. It marks a significant jump from the party’s conversion rate in 2021 (1.2) and in 2020 (1.7).

“While registered Democrats still outnumber registered Republicans by more than half a million in Pennsylvania — 4 million Democrats to 3.4 million Republicans as of March 28 — the long-held Democratic advantage continues to narrow and is on pace to be the smallest in a general election since 2005,” the outlet noted.

Calvin Tucker, deputy chair for the Pennsylvania Republican Party, told Reuters he expected his party would see a strong showing as a result of the new registrations.

“It is a citywide outreach,” Tucker said. “We will do canvassing, knocking on doors, standing on corners, and talking to citizens and neighbors about who we are and what we are trying to achieve.”

Pennsylvania’s senate race is being closely watched as it could determine which party controls the Senate for the rest of President Joe Biden’s current term.

A recent The Hill/Emerson College poll indicated that 51% of likely Republican voters are unsure who they will support during the May 17 primary.

Hedge-fund CEO Dave McCormick and surgeon and television personality Mehmet Oz both had 14% of likely voters’ support. They are the only two Republican candidates to poll in the double digits.

McCormick and Oz have spent an estimated $24 million in advertisements as of the end of March, reports PolitiFact.

Pennsylvania voters will also elect a new governor in November since two-term Governor Tom Wolf, a Democrat, is not permitted to seek reelection.

“If a Republican wins the gubernatorial election this year, it could mean that the party would control both the Legislature and the governor’s mansion. Republicans currently hold a majority of seats in both the state House of Representatives and the state Senate,” reports NBC Philadelphia. “However, for 16 of the last 20 years, a Democrat has been governor.”

Pennsylvania Attorney General Josh Shapiro is currently the only Democrat running for governor. 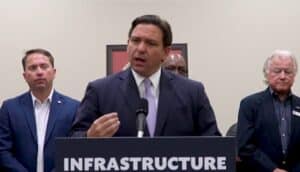