Florida Governor Ron DeSantis has responded to New York City Mayor Eric Adams attempts to convince Floridians to move to his city over the Parental Rights in Education legislation passed in the Sunshine State.

Speaking to reporters, DeSantis addressed the ad campaign targeting his constituents inviting them to NYC.

NY to kids in the classroom: muzzle yourself and listen to our politics in the classroom
Florida: be free and we will make sure your education remains focused on the fundamentals (writing, math, the classics, civics, and now, finances) to best prepare you to succeed in the world pic.twitter.com/uNMHeXPoiU

“New York is doing billboards telling people to ‘Come to New York from Florida,’ you know, they are wasting taxpayer money on doing that,” DeSantis said. “They’re saying you can say whatever you want, but you know they’re the ones that will force a mask on your face and muzzle you in public.”

The digital billboards have been placed in Fort Lauderdale, Jacksonville, Orlando, Tampa and West Palm Beach and will run through the end of May. One of them features a colorful collage of the word “GAY” and says, “Come to the city where you can say whatever you want.” Another says, “People say a lot of ridiculous things in New York. ‘Don’t say gay’ isn’t one of them.”

The law does not mention the word “gay.” It does restrict conversations about “gender identity” and sexual orientation in kindergarten through third grade classrooms.

Adams, speaking at City Hall earlier this month said, “We are going to loudly show our support and say to those living in Florida, ‘Listen, we want you here in New York.’”

“This is the city of Stonewall,” Adams asserted. “This is the city where we are proud to talk about how you can live in a comfortable setting and not be harassed, not be abused — not only as adults but also as young people.”

DeSantis’ press secretary, Christina Pushaw, recently addressed the campaign by saying, “Mayor Adams is doing Florida a favor. If anyone is so upset about our governor defending parental rights that they want to leave Florida for a crime-ridden socialist dystopia, our state will be better off without them.”

“In fact, the mayor should pay for their flights to NYC!” Pushaw added, according to a report from The New York Times. 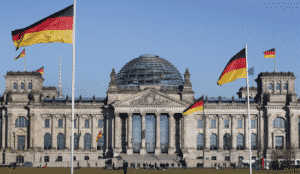