Pennsylvania Lt. Gov. John Fetterman easily won the Democrat nomination for Senate, though he had to celebrate his victory while still hospitalized from a small stroke he suffered on Friday.

“Thank you, Pennsylvania,” Fetterman said in a statement from the hospital. “The fact that so many of you entrusted me with your vote means the world to me, and it’s something I’ll never take for granted. I’m feeling better every day, and I’m going to be back on the campaign trail to thank you all in person soon.”

Fetterman, a progressive with similar political policies to Senator Bernie Sanders, was the frontrunner throughout his race. When it came to political endorsements, however, Lamb won that battle by a lot. He has now thrown his support behind the winner.

Fetterman had faced minor pushback over an incident during which he brandished a shotgun at a black jogger eight years ago, while he was the mayor of Braddock.

“In December 2013, Fetterman chased a Black jogger in his pickup truck after hearing what he thought were gunshots while playing outside with his son, according to media reports. He then held up the unarmed man, Chris Miyares, with a shotgun while waiting for police to arrive,” the Pittsburgh City Paper reported.

Miyares claims that Fetterman pointed the gun at his chest.

When police arrived, they found Miyares was unarmed and let him go. No charges were filed against either party.

Fetterman remained unapologetic about the incident, but addressed it in a campaign video. He maintains that he did not know the race of the man when he began the pursuit.

“It hasn’t changed me,” Fetterman told FOX-43. “The truth is, Braddock had a gun problem, Braddock has a gun problem. Philadelphia has a serious gun violence problem. I can’t be afraid of the consequences of doing the right thing.”

The projected nominee was unable to attend his victory party as he had a stroke caused by atrial fibrillation on Friday and received a pacemaker on election day. His wife Giselle attended in his place.

The GOP race remained too close to call as of 6:00 a.m. Wednesday morning, with 95 percent of precincts reporting. At time of publishing, Dr. Mehmet Oz and businessman David McCormick were less than half a percentage point apart. 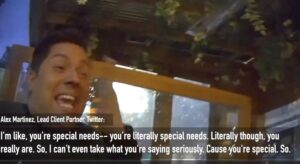