Rep. Borowicz asserted that the bill aims to go further than the Parental Rights in Education bill signed by Florida Governor Ron DeSantis, which bans discussions of that nature through third grade.

The measure, House Bill 2813, says it is “an act providing for classroom instruction on sexual orientation and gender identity and for parental notification of student health care services; and establishing cause of action for violation.”

The lawmaker says that it will prohibit classroom instruction on sexual orientation and gender identity in kindergarten through 5th grade, require classroom instruction be age-appropriate, and require public schools to adopt procedures for notifying parents if there is a “change in services from the school regarding a child’s mental, emotional or physical health or well-being.”

“It is imperative that we ensure that parents have the right to be informed about the services offered to their children at school, and that elementary school children are protected from inappropriate sexual content in our classrooms,” Rep. Borowicz said in a memoranda about the bill. “As similar legislation is signed into law in other states, it is time to take similar steps in Pennsylvania to ensure that parents, first and foremost, have the right to make decisions regarding the upbringing of their children.”

Rep. Borowicz said during a press conference last week that “this is a bill to protect our children from gender ideology and sexual orientation being taught in our children’s school – the same nonsense that is now on the Department of Education’s website,” according to a report from The Hill.

The representative was referring to a website created by the state’s DOE instructing teachers and school officials on how to “create gender inclusive schools and classrooms.”

The website includes a link with instructions for creating a “gender neutral day” in classrooms for children as young as third grade.

The lawmaker said that while her measure goes further than the Florida law, it still “doesn’t go far enough.” She said that it “needs to really be protected all the way up to twelfth grade,”

“We need to go all the way,” Rep. Borowicz said. 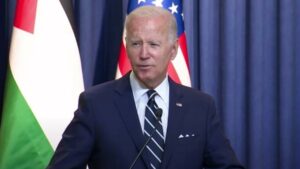 Majority of Democrats Want Someone Other Than Biden For 2024 Nominee