House Speaker Nancy Pelosi defied a notice from the Archbishop of San Francisco over the weekend, which barred her from receiving communion over her support for abortion.

Pelosi took communion at the 9 a.m. Mass at Holy Trinity in Georgetown over the weekend, according to report from Politico.

Archbishop Salvatore Cordileone announced that she may no longer receive it in a public notification letter to her that was published on Thursday.

“As you have not publicly repudiated your position on abortion, and continue to refer to your Catholic faith in justifying your position and to receive Holy Communion, that time has now come,” Cordileone said.

“Therefore, in light of my responsibility as the Archbishop of San Francisco to be ‘concerned for all the Christian faithful entrusted to [my] care’ (Code of Canon Law, can. 383, §1), by means of this communication I am hereby notifying you that you are not to present yourself for Holy Communion and, should you do so, you are not to be admitted to Holy Communion, until such time as you publicly repudiate your advocacy for the legitimacy of abortion and confess and receive absolution of this grave sin in the sacrament of Penance,” the letter continued.

The Speaker took to the airwaves on Tuesday to express her grievances with the order on MSNBC’s “Morning Joe.”

NEW: Asked on MSNBC’s Morning Joe just now about the San Francisco archbishop’s decision to bar Nancy Pelosi from Communion, the Speaker invokes Matthew 25, notes bishops haven’t barred from Communion lawmakers who back the death penalty, which is also condemned by the church. pic.twitter.com/uS5nat1eMI

“I wonder about the death penalty, which I am opposed to,” she said. “So is the church, but they take no action against people who may not share their view.”

Many anti-abortion Catholics argue that a baby is innocent, while the death penalty is meant to only be given to the most egregious dangerous criminals.

“What is important for women to know, and families to know, [is] that this is not just about terminating a pregnancy,” Pelosi continued. “Some of these same people are against contraception, family planning, in-vitro fertilization. It’s a blanket thing, and they use abortion as the front-man for it while they try to undo so much.”

“For public sentiment to weigh in, people have to know,” Pelosi continued. “Women have to know how pervasive this is.”

The Supreme Court is expected to announce their decision regarding Roe v. Wade by the end of June. A leaked copy of a draft opinion from February stated that the court was ready to overturn it at that time, but justices can change their minds until the decision is signed.

When Cordileone publicly spoke out about Pelosi’s abortion views last Fall, the speaker downplayed his comments as having a “disagreement” about the issue

“I believe that God has given us a free will to honor our responsibilities,” Pelosi said at the time.

Fox News noted that in a 2008 interview, Pelosi claimed that “as a devout, practicing Catholic,” the Church has “not been able to make that definition” of when life begins. The comment drew criticism from multiple top US bishops, to whom she responded that “the point is, it shouldn’t have an impact on the woman’s right to choose.” During that interview she had also stated that she wanted abortion to be “rare,” a seemingly far cry from the Democrat Party’s position of today.

During the same year, Pelosi was asked about the possibility of being denied communion on C-SPAN’s “Q & A.”

“I think some of it is regional. It depends on the bishop of a certain region and fortunately for me, communion has not been withheld, and I’m a regular communicant so that would be a severe blow to me if that were the case,” Pelosi said. 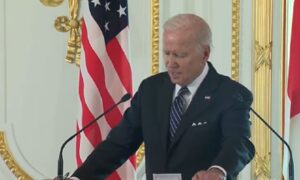