No airline has agreed to fly the passengers home, amid criticism of the original flight in light of COVID protocols

The organizer of a New Year’s influencer party flight from Montreal to Mexico has apologized after being met with public outrage.

The entire group is now stranded in Mexico as the airline refuses to charter the return flight.

James Awad, the founder of the 111 Private Club, planned the party and chartered an aircraft with Sunwing, a vacation and aviation group.

Footage of the group drinking, vaping, partying, and singing without masks went viral after the Dec. 30 flight. As a result, Sunwing refused the January 5th flight to return the passengers to Montreal.

Awad is trying to persuade other airlines to take them all as a group, promising that they will wear their masks and behave appropriately.

In a statement provided on Thursday, Awad said, “At this time, the 111 private club is working tirelessly to get everyone back home safely as quickly as we can.”

“The 111 private club is a dream and a vision that I poured my heart and soul into creating. This was my first travel event. I have significantly learned, and I am still learning from this experience,” he added.

Awad maintains that they did nothing wrong on the flight. The only people on board were part of the private group, and they had all tested negative for COVID before boarding the flight.

The 111 private club respected all instructions given by Sunwing. Alcohol was sold to my group throughout the whole flight. My group is A1 😎

Awad did acknowledge why people were so enraged with the videos as Omicron has COVID cases soaring around the world.

“We know how hard people have worked to keep themselves safe, to limit their family gatherings at Christmastime, to wear masks, to get vaccinated, to do all the right things,” Trudeau continued. “It’s a slap in the face to see people putting themselves, putting their fellow citizens, putting airline workers at risk by being completely irresponsible.”

Members of the group are likely in for more than public criticism as the federal government has launched an investigation, and ministers said passengers might face fines.

“Our government takes reported incidents such as these very seriously,” the statement said.

“We have directed our respective departmental officials to immediately launch an investigation into these allegations of non-compliance with COVID-19 and air safety rules and regulations.”

At this time, the group has not yet secured a flight to return to Canada. 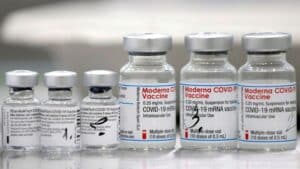