Two parents were tased by police outside an Arizona elementary school on Friday while it was on lockdown over an armed male that had reportedly tried to gain access to the building.

The incident took place at the Thompson Ranch Elementary School in El Mirage at approximately 10:30 a.m., according to the El Mirage Police Department.

“At approximately 10:30 a.m. on August 12, 2022, a male subject attempted to again access into Thompson Ranch Elementary School in El Mirage. It was reported the male subject had a handgun. School staff contacted law enforcement and immediately implemented lockdown protocol,” the department said in a Facebook post.

As officers arrived, the male suspect fled the scene in an “unknown direction,” according to the police department.

“As the campus was locked down, law enforcement officers began clearing the facility for any threats. During this time, a suspicious package was located. Students and staff were moved to an area away from the package, which was ultimately examined by explosives technicians and rendered safe,” the department’s post continued.

While the campus was being cleared, parents began arriving at the school and trying to get to their children inside the building.

“Several attempted to force entry into the buildings past officers. It was at this time that a male began an altercation with officers. Two other individuals joined in the altercation. Officers deployed Tasers, taking the three into custody. One person taken into custody was in possession of a handgun,” the statement said.

The scene was ultimately cleared and no explosives or other dangerous items were recovered.

Eventually, the suspect was located and taken into custody. He is now under evaluation by mental health professionals, and criminal charges are pending.

Despite tasing and arresting parents, the department said that “the cooperation between law enforcement and the Dysart School District in following established protocols maintained utmost safety for children and staff.”

Just over two months ago, a similar scene with parents unfolded outside Robb Elementary School in Uvalde, Texas. The shooting left 19 children and two teachers dead. The botched police response has been widely blamed for the amount of deaths.

“As a parent, I understand that philosophy, however, there were procedures that law enforcement and the school were following,” El Mirage police Lt. Jimmy Chavez told reporters at the scene, according to a report from NBC News. 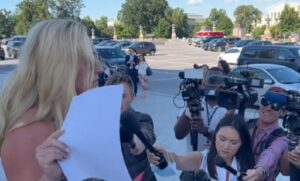