Panel Issues Selective Approval for COVID-19 Pill to the FDA

The pill from Merck is known as molnupiravir

An antiviral pill designed to combat COVID-19 from Merck received partial approval from a panel of doctors advising the Food and Drug Administration.

During the day-long deliberation, committee members debated the pill’s necessity and role in combatting COVID-19 as other treatments have been proven to be effective among afflicted Americans.

“The advisers also grappled with the rare risk that the drug’s mechanism of triggering new mutations of the virus might lead to a new variant of concern from SARS-CoV-2, especially in immunocompromised patients who might harbor and spread error-riddled copies of the virus for weeks after the treatment ends or people who do not hew closely to prescriptions to take all five days of pills,” per CBS News.

In a 13-10 vote, the F.D.A. Antimicrobial Drugs Advisory Committee said the pill’s benefits outweighed any potential risks. The panel recommended the medication, known as molnupiravir, for public use.

Drugmaker Merck was the first company to introduce a medication for the symptoms of COVID-19. The British government approved the pill in early November for adults with mild-to-moderate symptoms of the virus.

“The positive outcome of today’s F.D.A. Advisory Committee meeting, following a comprehensive review of molnupiravir, including the compelling data from the MOVe-OUT study demonstrating a significant reduction in hospitalizations and deaths, is a critical step toward bringing this promising oral medicine for COVID-19 to appropriate patients in the U.S.,” Li said in a statement on Nov. 30.

“We are one step closer to being able to add molnupiravir to the tools that we have – in addition to vaccines – that can be available and accessible to help fight COVID-19,” said Wendy Holman, the chief executive officer of Ridgeback Biotherapeutics. “Importantly, our data show activity against the most prevalent variants today, and molnupiravir was studied as a monotherapy with no drug-drug interactions observed to date. We will continue to work with urgency to bring this investigational medicine forward to appropriate patients.”

Merck is not the only company seeking approval for a COVID-19 antiviral pill.

“Pfizer has submitted its own antiviral pill for emergency authorization as well. The U.S. government then purchased 10 million of Pfizer’s antiviral pills prior to FDA approval,” per The Washington Examiner.

The vote is not a binding resolution but rather a recommendation to the FDA. The agency has not said if it will hold a similar meeting before approving Pfizer’s pill. 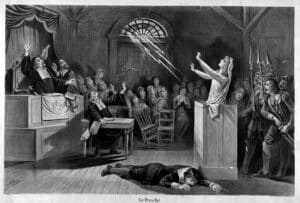 The Great American Witch Hunt: Woke McCarthyism and the Trial By Media