The Danish company stopped its business in Russia and Belarus on Feb. 24

Pandora announced it will leave the Responsible Jewelry Council because the organization has not publicly ended its connections with Russia.

The Danish jewelry manufacturer, known for its charm bracelets, says the RJC should have suspended its partnership with Russian companies and stopped business in the nation after its invasion of Ukraine.

“We are shocked and saddened by the unprovoked attack on Ukraine, and our thoughts go to the people of Ukraine, who are victims of this senseless act of military aggression,” Pandora Chief Executive Officer Alexander Lacik said in a statement.”The war requires all businesses to act with the utmost responsibility regarding any interactions or business dealings with Russia and Belarus. Pandora cannot in good faith be a member of an association that does not share our values.”

The company said it stopped its business in Russia and Belarus on Feb. 24.

“Pandora has also instructed all its suppliers and business partners that no raw materials, products or services supplied to Pandora can come directly or indirectly from Russia or Belarus,” according to its March 30 announcement.

The RJC governs the ethical standards in jewelry and watches production. The trade association was founded in 2005. There are more than 1,500 members including Richemont’s Cartier and Tiffany & Co. Pandora has been a member for the last 12 years.

“To achieve ‘certified’ status, members must complete an independent third-party audit to prove their conformance to the Code of Practices,” notes the RJC. “Further audits are required to renew certification every 1-3 years.”

Alrosa, the world’s largest producer of diamonds run by the Russian state, left the RJC’s board voluntarily on March 3. The company is still listed as a member and has the RJC certification on the trade association’s website, per Reuters.

In the announcement, the RJC said Alrosa remained “committed to the RJC’s highest standards of responsible business practices and sustainability pledges, and continues to contribute to the positive impact to the communities and the people where it operates.”

“Like so many, we are deeply saddened by the geopolitical situation in connection with the Ukraine crisis,” said David Bouffard, RJC Chair. “The RJC will continue to closely monitor the situation in accordance with international regulations and update its members with guidance as it evolves.”

Alrosa was also suspended from the Natural Diamond Council although the organization’s chairman Stephen Lussier noted in an interview with Woman’s Wear Daily that current sanctions do not prevent the company from selling diamonds worldwide.

Pandora reported over $1.1 billion in United States sales in 2021. The American market accounts for 30% of the company’s total sales. 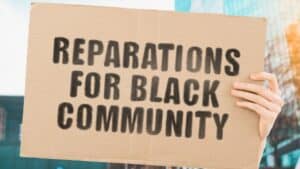 California Reparations Panel Votes To Restrict Compensation to Descendant of Black Americans Who Arrived in U.S. During The 19th Century