Accused Oxford High School shooter Ethan Crumbley is reportedly obsessed with notoriety, even asking jail staff how he can get his “fan mail.”

Assistant Oakland Prosecutor Kelly Collins told a court on Tuesday that Crumbley asked in jail, “How do I get my fan mail? How do I get my hate mail?” She added that he “wants that notoriety” and has “a deeper and more calculated mind than any other 15-year-old.”

The hearing was over a request from the defense to have the teenager moved from the Oakland County Jail to Children’s Village in Pontiac.

Prosecutors argued that he is far too dangerous to be housed with other minors.

Crumbley has also been communicating with people using a tablet, telling someone “my court date is Feb. 22. Maybe you can watch me on TV.”

The 15-year-old has been jailed ever since he carried out a mass shooting at Oxford High School in the Detroit suburb of Oxford Township, Michigan. Four students were killed and seven were injured in the attack.

The prosecutor argued that “in addition to plotting a mass shooting, he also outlined a plan to stalk, rape, torture and kill a female classmate, journaled about surviving the shooting so that he could witness the suffering and expressed joy in torturing baby birds,” the Detroit Free Press reports.

“He wants to be remembered,” Collins told the court. “His actions were not impulsive. They were calculated, rehearsed, and well thought out.”

“The defendant’s anti-social behavior is very concerning,” Assistant Oakland County Prosecutor Markeisha Washington added. “He bragged about wearing a mask to the public. He enjoyed his dark side.”

The defense argued that he is indeed receiving fan mail, mainly from women, and it could be better monitored in a children’s facility.

“These are emails from strangers all around the world,” defense attorney Paulette Loftin told the court during the hearing. “At Children’s Village we are able to control that communication.”

“The jail is not equipped with handling juveniles,” Loftin added.

Crumbley is being held without bond on terrorism and first-degree murder charges awaiting his trial.

The teenager is being housed in the same jail as his parents, Jennifer and James Crumbley, who were arrested and charged with involuntary manslaughter for providing him with the weapon.

Crumbley has pleaded not guilty and his lawyers plan to use an insanity defense.

Judge Kwame Rowe said that he will make a decision about where Crumbley will be imprisoned in the coming days.

Watch the hearing below: 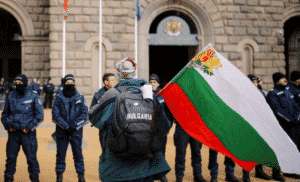