An 81 percent majority of American adults believe it is likely that there will be a recession in 2022, according to a new poll.

The CNBC poll also found that 48 percent of Americans are thinking about rising prices “all the time.”

While Republicans are more likely to believe a recession is impending, nearly three quarters of Democrats reported that they share the same concern.

The pollsters found that 91 percent of Republicans believe there will be a recession this year, while a smaller 73 percent majority of Democrats agree — as well as 81 percent of independents.

The last recession, per the National Bureau of Economic Research, took place in 2020 due to the COVID pandemic.

In a report published on Tuesday, Deutsche Bank became one of the first major banks to forecast a recession, but they believe it will come in 2023.

“They see the Fed raising rates by 50 basis points at each of its next three meetings on its way to a peak above 3.5% by the middle of next year. The Fed’s current target for the federal funds rate is 0.25% to 0.5%, after it lifted off levels near zero last month,” Bloomberg reports.

Goldman Sachs Group Inc. economists also said that they believe a recession is possible in their own report published on Monday.

Bloomberg reports that the economists believe that a downturn was “far from inevitable,” as both consumers and companies are “flush” with funds.

“Our call for a recession in the U.S. next year is currently way out of consensus,” the Goldman Sachs Group’s report stated. “We expect it will not be so for long.”

Ultimately, Goldman Sachs predicted that there is a 38 percent chance of recession in the next two years.

Last month, Goldman Sachs chief economist Jan Hatzius warned that oil prices reaching $200 a barrel would throw the US into a recession, according to a report from Yahoo News.

“We estimate that it would take a sustained oil price increase to $200 per barrel to produce an income shock similar in magnitude to those that precipitated the 1974 and 1979 recessions — and this would significantly increase the 2022 recession odds,” Hatzius said on March 24.

RBC Capital Markets analyst Michael Tran claimed that the cost reaching $200 a barrel by this summer is possible during an interview on Yahoo Finance Live.

“It is not unfathomable for prices to rocket to $200 a barrel by summer, spur a recession and end the year closer to $50 a barrel ($200 call options have been bid). To be clear, this is not our base case, but such a scenario does not sound implausible today,” Tran said. 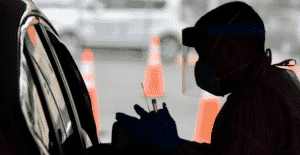