Over 300 journalists at Thomson Reuters have launched a 24 hour strike to demand higher wage increases.

The Reuters NewsGuild Union announced the strike on Thursday in a lengthy tweet thread with videos explaining their complaints.

More than 300 @Reuters journalists across the United States are stopping work today for a 24-hour walkout. We do not take this decision lightly, but we’re prepared to avail ourselves of all our legal rights to secure the contract we deserve. pic.twitter.com/vUetgxxuWF

According to the union, the journalists have not had a general wage increase in over two years. They noted that they did not get raises even while working “the frontlines of the pandemic and in conflict zones.”

When the journalists requested wage increases, the union says that they were offered zero — then finally a one percent increase on their salaries.

“One percent increase during nearly double-digit inflation?” the union asked in the video, before pointing out that Thomson Reuters is worth $50 billion.

“The pandemic has been good for Thomson Reuters,” the video message says. “Forbes says the Thomson family which owns Reuters increased their wealth by $9 billion during COVID-19.”

In a subsequent tweet, the union posted a video message featuring many of their journalists voicing their complaints, including eliminating nearly all overtime pay during the pandemic.

For 20 months, we’ve been pressing for a new contract with serious diversity targets for the newsroom, a ban on NDAs that cover up harassment and discrimination, guaranteed wage increases that keep up with inflation, and more. pic.twitter.com/UioUpbPL0L

“For 20 months, we’ve been pressing for a new contract with serious diversity targets for the newsroom, a ban on NDAs that cover up harassment and discrimination, guaranteed wage increases that keep up with inflation, and more,” the tweet said.

At this point it’s been 2.5 years since we last received a general wage increase. Even without a contract, we’ve risen to the challenges of covering a vicious pandemic, receiving praise from our bosses and helping to widen @Reuters profit margins. We’ve been patient. pic.twitter.com/QhS1nGGhrT

That stinginess is especially galling considering @ThomsonReuters announced it’s financially comfortable enough to spend $2 billion buying back its own stock and another $2 billion on dividends, to the benefit of shareholders and executives. https://t.co/ah34gqfKNx

A Reuters spokesperson told The Hill that the company is “fully committed to constructive negotiations” with the union.

“These conversations are ongoing and we will continue to work with the Guild committee to settle on mutually agreeable terms,” the spokesperson said.

The news organization also said that they have a “contingency plan” in place to minimize disruption by the strike.

“We have extensive contingency plans in place that will minimize this brief disruption and are confident that we will deliver the highest quality of service to all our customers,” the spokesperson added. 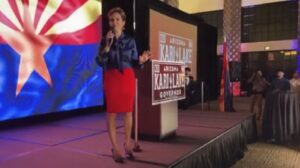