Majority of US States Will Fight Biden’s Vaccine Mandate

Over half of the states in the union plan to fight the vaccine mandate set out in President Joe Biden’s recent executive order.

“The executive order directs the U.S. Department of Labor’s Office of Safety and Health Administration (OSHA) to require private businesses with more than 100 employees mandate that their workers receive both doses of the COVID-19 vaccine or undergo weekly testing,” says The Center Square. “Noncompliance would result in fines of $14,000 per violation.”

Kentucky Attorney General Daniel Cameron and Louisiana Attorney General Jeff Landry, whose states are led by Democratic governors, have also announced their intention to push back on Biden’s orders.

​Arkansas Governor Asa Hutchinson told NBC, “​This is a very serious deadly virus, and we’re all together in trying to get an increased level of vaccination out in the population … The problem is that I’m trying to overcome resistance, but the president’s actions in a mandate hardens the resistance​.”

“And so this is an unprecedented assumption of federal mandate authority that really disrupts and divides the country. It divides our partnership between the federal government and the states, and it increases the division in terms of vaccination when we should all be together trying to increase the vaccination uptake,” he added.

Nebraska Governor Pete Ricketts said the vaccine should be a personal choice. He told Fox News some of his constituents said they would rather be fired than forced to get the vaccination.

Other governors questioned the constitutionality of Biden’s actions.

The American Dream has turned into a nightmare under President Biden and the radical Democrats. They have declared war against capitalism, thumbed their noses at the Constitution, and empowered our enemies abroad.

Biden’s vaccine mandate is an assault on private businesses.

I issued an Executive Order protecting Texans’ right to choose whether they get the COVID vaccine & added it to the special session agenda.

Texas is already working to halt this power grab.https://t.co/TwoQMhDxoM

Last week, while speaking at a middle school, Biden said he was “disappointed” that the governors were planning on taking legal action against his mandate, which will impact  80 million Americans.

It is still unclear how the mandate will be enforced.

The Washington Examiner reports “no legal challenge can come together until the Biden administration puts forward its rules, which it has not yet done, the official noted. Biden announced last week that he had instructed the Department of Labor to develop the requirement, and White House Coronavirus Response Coordinator Jeff Zients told reporters on Friday that the rule would be developed within ‘the coming weeks,’ offering no specifics on the timeline.”

Editor’s Note: A previous version of this article claimed 75.7% of Americans over the age of 18 are fully vaccinated, when in fact the percentage referred to Americans over 18 who only received one dose. The same version also erroneously said 27 governors were challenging the vaccine mandate, instead of clarifying that 25 governors and two attorneys general were planning to challenge to mandate. The article has been updated accordingly. 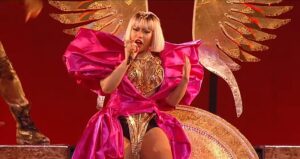 Nicki Minaj Refused to Get Vaccinated For the Met Gala