The majority of the infected at both hospitals are fully vaccinated

A wave of hospital staff members at two hospitals in San Francisco tested positive for COVID-19 last week regardless of their vaccination status.

Most cases involved the Delta variant, which is described as “highly infectious.”

“The University of California-San Francisco Medical Center told media outlets that 183 of its 35,000 staffers tested positive. Of those infected, 84% were fully vaccinated, and just two vaccinated staff members required hospitalization for their symptoms. At Zuckerberg San Francisco General Hospital, at least 50 members out of the total 7,500 hospital staff were infected, with 75-80% of them vaccinated. None of those staffers required hospitalization,” per Business Insider.

Dr. Lukejohn Day, UCSF’s chief medical officer, told the New York Times that most of the cases presented mild to moderate symptoms, and some were completely asymptomatic. He said the cases were spread among doctors, nurses, and ancillary staff.

“What we’re seeing is very much what the data from the vaccines showed us: You can still get COVID, potentially. But if you do get it, it’s not severe at all,” he said.

Per CBS SFBayArea: “With the number of cases [rising] again due to the Delta variant, UCSF officials said they were doubling down on efforts to protect staff.” The hospital requires “all employees and trainees comply with the new UC-systemwide COVID-19 vaccination mandate, though there are limited exceptions for medical or religious reasons.”

In addition, UCSF reinstated the “masking requirement at all levels across the university, including staff, patients and visitors, as well as quarantines for those who have been exposed to COVID-19 in their households, to prevent transmission to others.”

The outbreak has been attributed to “community spread.” Day noted that they have not found any staff-to-patient or patient-to-staff transmissions. The hospitals “caught these cases through symptom screenings—more employees have been reporting mild cold-like symptoms,” says ABC7.

The San Francisco Chronicle reports that a non-profit organization gave an eighth of an ounce of cannabis to everyone 21 or older receiving either their first or second jab during an event outside the UN Plaza on Friday. The giveaway aimed to encourage young people to get vaccinated. 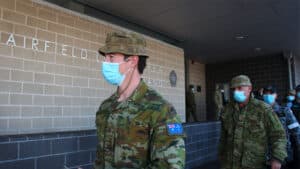