Over 200 Seattle police officers are at risk of being fired if they refuse to get vaccinated or hand over their private medical data regarding their status.

The Seattle Police Department has already lost approximately 300 officers since the push to defund the department during the Black Lives Matter riots.

Washington Gov. Jay Inslee issued an order on Monday requiring most state employees and health care workers to get vaccinated by October 18 or lose their jobs.

Seattle’s KTTH reports that “there are just over 200 officers who say they either haven’t been vaccinated against COVID or refuse to turn over their private medical data. That represents roughly 20% of the SPD’s deployable staff.”

“The City of Seattle now says full vaccination against COVID is a condition of employment, regardless of one’s age, risk factors, or prior infection. Religious and medical exemptions are offered, but it’s unclear if the city will accommodate the requests,” the KTTH report states.

Mike Solan, president of the Seattle Police Officers Guild, has expressed extreme dismay with the mandate.

“We could potentially have a lot of officers that could be terminated,”  Solan said during a podcast appearance last month. “If you are advocating for more police officers because you know crime is on the rise, you need more cops because of what the City Council did. Why are you threatening us with our jobs (if) you don’t get this vaccination. It’s unbelievable to me, it doesn’t make any sense.”

Mayor Jenny Durkan’s office has claimed that there are negotiations underway with police officers and firefighters.

“The City has begun bargaining the impacts of the vaccine requirement with unions, including the Coalition of City Unions, SPOG, and IAFF Local 27,” Durkan’s spokesperson Kelsey Nyland said in a statement obtained by KOMO News. “We continue to prioritize good faith engagement with our labor partners throughout this effort to keep our employees – and the communities we serve – safe.”

KTTH noted “the SPD is already staffed at record lows not seen since the 1980s. Consequently, proactive policing is non-existent for the majority of Seattle.”

“Many times, there are only about 70 officers patrolling the city on any given night. This has helped lead to a surge in violent crime with the city on pace to break the 26-year-high homicide rate set in 2020. With just over 1,000 deployable officers, the city is about 300-500 officers shy of where they hope to be.” 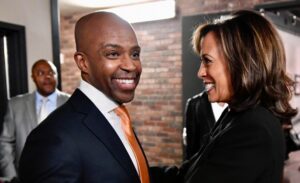