Within days of the filing, George was fired. The decision by Gov. Albert A. Bryan Jr. to fire the prosecutor, who had served four years in his administration, was made because George allegedly failed to inform Bryan of the legal action before the case was filed with the court, according to an unnamed source who spoke to a local reporter.

In a Jan. 9 statement, George called for legal proceedings against the banking giant to continue.

“That is why I stand firm in my belief that the lawsuit I filed against JPMorgan Chase in our pursuit of justice must continue. No institution, organization or person should be off-limits, no matter how wealthy or powerful. The people are owed justice,” she said, according to local publication the St. Thomas Source.

The suit also names former head of JP Morgan’s Private Bank Jes Staley, who prosectors say “developed a close relationship with Epstein.” The private banking division is dedicated to wealthy clients who maintain at least $10 million in assets with the bank.

Staley, who exchanged around 1,200 e-mails with Epstein over a four-year period, was a major Democrat Party donor and donated $20,000 to U.S. President Joe Biden ahead of the 2020 election.

“The Epstein anti-criminal enterprise lawsuit brought accountability for their sex trafficking operation of girls and women and Epstein’s fraudulent acquisition of over $80 million dollars in tax benefits from the Virgin Islands,” she said. “Now those funds can be applied to programs that provide services to assist victims of sexual assault, sex trafficking and child abuse and sexual exploitation in the Virgin Islands, along with other purposes that serve the public good, health and safety.”

George thanked the Governor for appointing her and urged officials to ensure a high level of integrity in the Office going forward.

“The Virgin Islands Attorney General, as in everywhere else in the United States, is required to prosecute or pursue legal action for violations of the law, and to serve the people,” she said. “We are to administer justice fairly and impartially without political influence or interference. Doing the job of the Attorney General should not be incompatible with holding the job of Attorney General.” 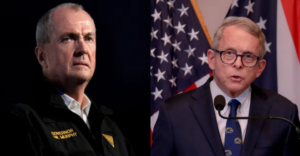 Ohio and New Jersey Are the Latest States to Ban TikTok