Elon Musk’s purchase of Twitter has ruffled more than a few feathers in the corporate press and political sphere. Arguably the most influential “town square” for opinion sharing and narrative shaping (via Trending Topics and blue-check verification followings) is on a path to be bought by a supporter of free speech. One clear-cut example of a news source’s knee-jerk reaction to Musk’s purchase of Twitter is the New York Times’ response. Once the exalted “paper of record,” the New York Times has seen its credibility called into question with retractions galore. “The Grey Lady,” as it is known, printed a story insinuating that the South African-born Musk was or is a supporter of the apartheid regime. John Eligon, one of the co-authors of the piece, tweeted: “Elon Musk grew up in a South Africa that saw the dangers of unchecked speech: Apartheid govt propaganda fueled violence against Black people. Musk didn’t experience that. He grew up in a bubble of white privilege.” The notion that South Africa’s problem was “unchecked speech” is a pseudo-historical denial of facts that fails to recognize the experiences of individuals such as Steve Biko and Donald Woods.

Civil liberties such as freedom of speech were scant in apartheid South Africa. The Native Administration Act of 1927, in effect under this time period, stated:

“Any person who utters any words or does any other act or thing whatever with intent to promote any feeling of hostility between Natives and Europeans, shall be guilty of an offence and liable on conviction to imprisonment not exceeding one year or to a fine of one hundred pounds or both.”

Yet the New York Times appears to characterize what was wrong with South Africa as “unchecked speech,” rather than government censorship in tandem with government propaganda.

The beginning of the NYT article notes that the neighborhood Musk grew up in was imbued with, in their words, “anti-Black government propaganda.” The word “misinformation” is repeatedly used to describe the government-pushed propaganda, when it would in fact be, according to Merriam-Webster, disinformation.

The Merriam-Webster definition of “misinformation” is simply “incorrect or misleading information.” Disinformation, by contrast, is defined as “false information deliberately and often covertly spread (as by the planting of rumors) in order to influence public opinion or obscure the truth.” Government propaganda spread by the apartheid regime would fall under disinformation, not misinformation.

Like many Cold-War era dictatorships, the South African military consisted of conscripts rather than volunteers. In 1986, at age 17, Elon Musk fled the apartheid-governed country for Canada to avoid being drafted.

“According to a biography of Mr. Musk, written by Ashlee Vance, Mr. Musk said he did not want to partake in South Africa’s mandatory military service because it would have forced him to participate in the apartheid regime — and that may have contributed to his decision to leave South Africa shortly after high school graduation.”

The Grey Lady’s word choice matters — the implication that opposition to apartheid may have contributed to his decision makes it seem as if Musk’s reasoning was unclear. However, Musk has directly stated in a Participant interview: “You know, spending two years suppressing black people didn’t seem to be a great use of time.”

Perhaps Musk’s experience growing up in South Africa did not have the negative impact that NYT insinuates, but was instead an inspiration for him to defend freedom of speech in the 21st century. Most American journalists — including those at the New York Times — didn’t grow up in a Cold War dictatorship or totalitarian regime.

The apartheid system in South Africa was infamous for its cruelty. Apartheid laws forced those of African descent from their homes to live in squalor-ridden bantustans separately from South Africans of European (including Dutch Afrikaner as well as British) ancestry. Once in the bantustans, residents lost their South African citizenship. The best economic and educational opportunities were off-limits to the African-descended majority and exclusively were the purview of the European-descended minority. In 1977, Steve Biko, an activist against apartheid of African descent, was killed by four South African police officers for his activism. A journalist of European descent, Donald Woods, was forced to flee the country for his coverage of Biko’s story. This story was told in the 1987 film Cry Freedom.

The New York Times article’s word choice and selective representation of information comes across as desperate in its attempts to link Musk’s current worldview supporting free speech with that of the apartheid regime in South Africa. A closer examination of the facts suggests that apartheid did indeed influence Musk’s perspective — just not the way the NYT article wishes to portray. The brutality of South Africa’s system illustrated the dangers of censorship, government propaganda, and government-sponsored discrimination against individuals with opposing views may have inspired Mr. Musk to support freedoms found in his adopted homeland.

The New York Times’ authors clearly learned the wrong lesson from their examination of the historical record. For the NYT to summarize apartheid South Africa as being “rife with misinformation and white privilege” as opposed to “disinformation, segregation, forced resettlement and denial of basic human rights” would sound absurd in the era in which people like Nelson Mandela and Donald Woods were trying to — and ultimately succeeded — in ending apartheid. The legacy of the paper that proudly proclaims “All The News That’s Fit To Print” deserves better. So does the American public. 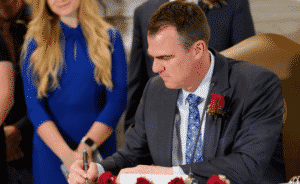 Oklahoma Legislature Passes Most Restrictive Abortion Law in the US