OPINION: The Complexity and Concern Sparked by Ukraine’s Azov Battalion

'The thing that they are Nazis is part of Russian propaganda,' said one supporter at a controversial NYC rally

Let’s talk about the curious case of Ukraine’s Azov Battalion.

In short, the Battalion is made up of capable, yet supposedly fringe, Ukrainian fighters in the most war-torn parts of the current Ukraine conflict and smaller scale battles dating back to 2014. However, they are also the subject of some concern due to their neo-Nazi ideology.

In 2018, the U.S. went as far as banning its aid from going to the group, stipulating in its omnibus spending that “none of the funds made available by this act may be used to provide arms, training or other assistance to the Azov Battalion,” The Hill reported. Japan only recently took them off of a terrorist list. The group has also been questioned over their logo, which appropriates Nazi symbolism including the black sun and wolfsangel, which seems to consistently rear its ugly head in Ukrainian war propaganda.

Extremism isn’t hard to find if you look hard enough, but it tends to exist mostly on the fringes and doesn’t enjoy widespread support among the public. However, despite clear and consistent reporting on their neo-Nazi ideology, use of symbols, and views espoused by their founder, Andriy Biletsky, in 2014 the Azov Battalion enjoyed widespread support from pro-Ukrainian groups and at least some measure of tacit approval from Western governments. 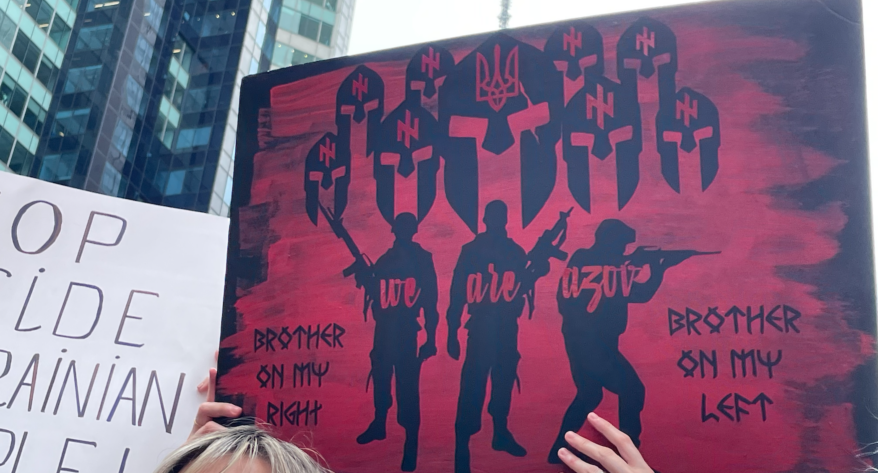 Pro-Ukrainian groups in New York City have been organizing and protesting against the unjust Russian invasion weekly since the war began. The Azov Battalion has been on the front lines of these battles in the Donbas and Asovastal, creating a rally effect for Ukranians around them. At a recent pro-Ukraine gathering, rallygoers cheered exuberantly for the group with a few wolfsangels on signs littered throughout the crowd.

Recently, as the battalion made a stand in Asovastal, New York City Ukrainian supporters showed their full support for the controversial battalion, with close to a dozen signs displaying neo-Nazi symbols. One protester’s sign read “Azov =/= Nazis, Azov = Patriots” along with the Azov battalion’s infamous wolfsangel logo.

During a rally in Lower Manhattan on April 16, I spoke to lead organizer Arthur Zgurov about the use of controversial symbols. He said the group has “no Nazis … they are nationalists but they are not against any other thing. They are protecting Ukraine and Ukrainian culture.” He went on to say that “the thing that they are Nazis is part of Russian propaganda.”

Zgurov acknowledged that the group has been placed on Japan’s list of terrorist groups in the past, but noted that they were recently removed from this list. Arthur also excused the group’s use of the wolfsangel as an innocuous symbol and quotes from Wikipedia that the wolfsangel has had a wide variety of uses including being “adopted by 15th-century German peasants during revolts against foreign mercenaries [and] thus became an important early popular Germanic symbol of independence and liberty.”

Zgurov also alleged that the symbol fuses an “N” and “I” as a reference to their “national identity” ideals.  Both explanations seem dubious, however, in the face of their use of other neo-Nazi symbols, such as the black sun, and their founder’s well-documented neo-Nazi related ideology. 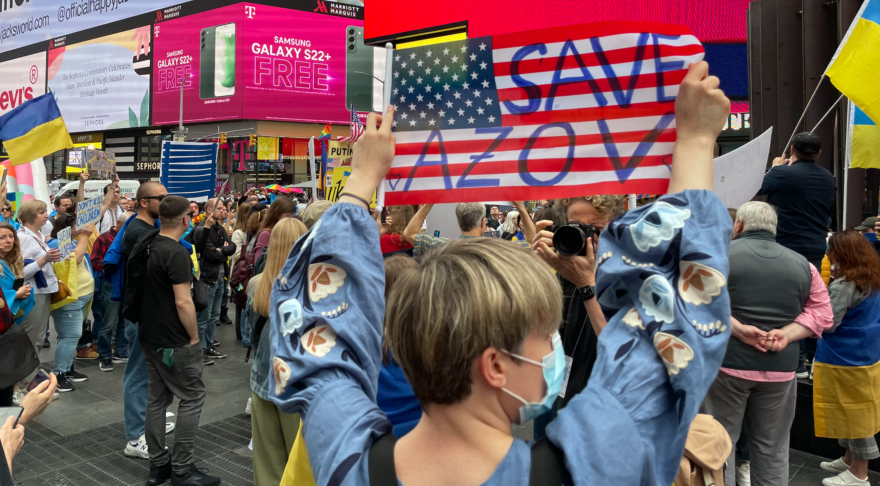 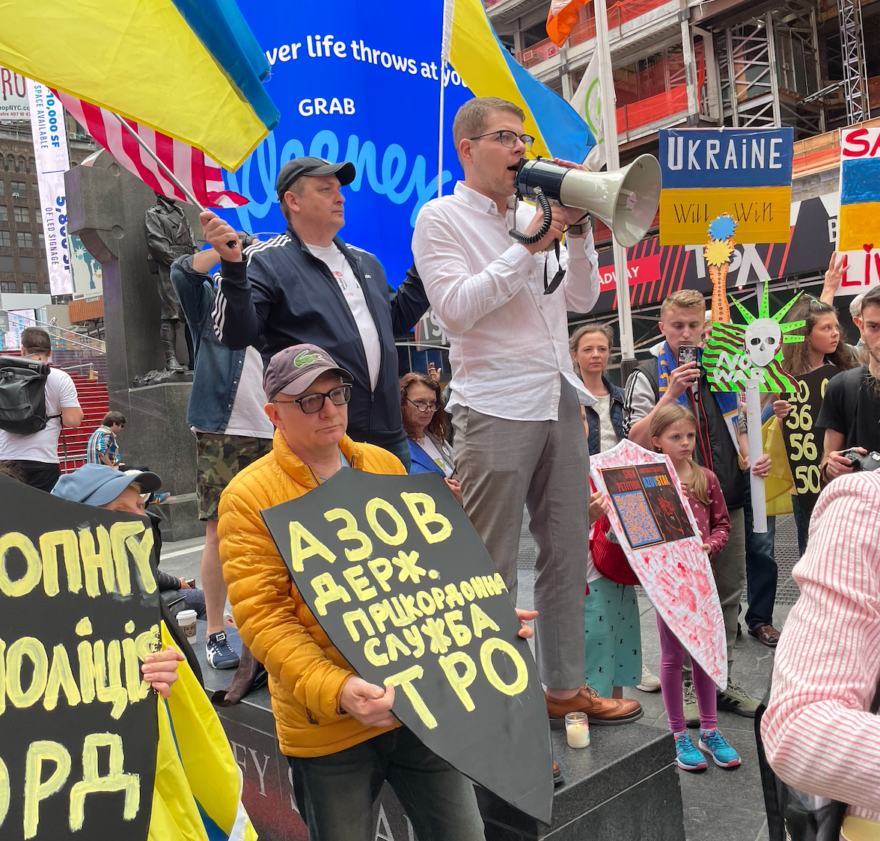 All the rally-goers I spoke to had positive things to say about the group and widely viewed them as patriotic heroes defending their homeland. One protester reached out to a relative allegedly fighting for the group in eastern Ukraine.  In response to the allegation of being a Nazi, he responded: “Nazis are people who want to dominate and suppress other nations … this is the opposite of what we are.”

He allegedly told her

“Nazis are people who want to dominate and suppress other nations .. this is the opposite of what we are” pic.twitter.com/mKxPTZbJMi

What’s even more troubling is the fact that state senators like Brian Kavanagh support rallygoers trying to obfuscate for the group.

“All countries that allow freedom of expression have objectionable political movements, including the United States,” he said at the April 16 rally. When prompted specifically on the neo-Nazi patches, Kavanagh responded: “I think to the extent that the Putin regime uses particular symbols or even genuinely objectionable things … as an excuse for invasion … it’s not right.”

Senator Kavanagh did not respond to a request for comment to clarify if he supports or condemns this battalion specifically or the pro-Ukrainian New Yorkers who support them.

It’s important to note that this ideology and framework doesn’t exist in a vacuum, and that Ukraine had a history of collaboration with the Nazis. National Geographic reported:

“A number of Ukrainians had collaborated: According to German historian Dieter Pohl, around 100,000 joined police units that provided key assistance to the Nazis. Many others staffed the local bureaucracies or lent a helping hand during mass shootings of Jews. Ukrainians, such as the infamous Ivan the Terrible of Treblinka, were also among the guards who manned the German Nazi death camps.”

Moreover, Ukraine has never conducted a single investigation into a local Nazi war criminal. This wasn’t lost on Israeli lawmakers when Zelensky addressed the Knesset comparing the Russian invasion to the Holocaust, ignoring some of Ukraine’s complicity in the Nazi-led atrocities. One anonymous Israeli minister went as far as to say “Zelensky also distorted the part his country played in the murder of Jews,” Times of Israel reports.

All this is not to say that we should or shouldn’t support Ukraine militarily or in other ways, but that geopolitics is complex and we should fully understand what we’re supporting and involving ourselves with. Propaganda is convincing, and war propaganda even more so. Is arming the Azov battalion justified given Ukraine’s invasion? I’m not sure. Can some of these weapons potentially — or eventually — land in black markets? Probably. Would the Ukrainians have any chance of winning against the Russians without our help? Certainly not. 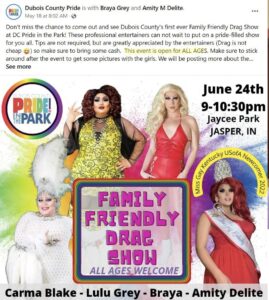