OPINION: The 2023 Golden Globes Was a Woke Clown Show

Nobody cares about award shows anymore

Televised award shows are dropping in viewership and relevance every year. Anyone still interested enough to pay attention to these circuses is watching them get live-tweeted instead. The Golden Globes went into hiding last year because the Hollywood Foreign Press Association got embroiled in a racism scandal.

The 2023 Golden Globes made a predictably woke and insufferable comeback to dozens of screens across the nation. Let’s tour the failures of this year’s snooze fest.

Legend has it that Ricky Gervais delivered a bombshell monologue to the Golden Globes in 2020 that made every Hollywood elitist snob in the audience squirm in their seat. When petitioned to return as host for 2023, Gervais simply said, “F— that.” Understandable.

Comedian Jerrod Carmichael was tasked with hosting this year, but nothing recognizable as comedy was performed. Instead, Carmichael (who checks boxes for obligatory inclusivity by being black and gay) resurrected the controversy the HFPA faced the year prior for having no black members on its voting committee.

“I’m here ‘cause I’m black,” quipped Carmichael. The pitfall of this joke is that if a renowned black comedian like Chris Rock were to say it, we would laugh at the ridiculous idea that his race scored him the opportunity. This time, however, we have reasonable suspicion that the HFPA invited a far less relevant comic to host in an attempt to save face.

“I won’t say they were a racist organization, but they didn’t have a single black member until George Floyd died,” Carmichael cynically remarked. He expressed surprise at being “invited to be the black face of an embattled white organization.” Although he won some cackles from champagne-drunk audience members, I doubt viewers at home were amused by Hollywood’s performative self-flagellation.

Michelle Yeoh took the stage later that night to accept her first Golden Globe for best actress in a musical/comedy motion picture. Instead of offering a quick thanks and taking her seat, the Everything Everywhere All At Once star spoke for four dreadfully boring minutes.

Sixty-year-old Yeoh complained about being micro-aggressed in show business for her Malaysian heritage, as well as being typecasted and losing out on roles due to ageism.

When producers tried to gently close her remarks with a soft piano interlude, Yeoh lashed out. “Shut up please,” she said, causing the audience to erupt with laughter. “I can beat you up, okay? And that’s serious.”

Violently threatening anyone who dares interrupt your laundry list of grievances is inexcusable, but the celebrity class is so socially maladjusted and narcissistic that they applaud such infantile behavior from a grown woman.

From 2022’s Oscars slapgate incident to outbursts like this, the pomp and circumstance of prestigious Hollywood award shows is rightly called into question. It will be sweet to watch viewership inevitably plummet toward zero. 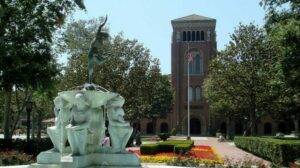