OPINION: Preferred Pronouns and More — What I Saw at the NEA Teachers Union Convention

How can public schools be a safe place for all students when NEA leaders demonize over half of the families represented in our schools?

As a teacher, I attended the National Education Association convention July 4-6, and my worst fears were confirmed.

It was also evident that the teachers union is a lobbying arm of the Democratic Party.

The NEA seems to think there are many gender options, and that’s why teachers and students must always address themselves with their “preferred” pronouns. It thinks this pronoun practice is essential and will create a more inclusive society.

That was demonstrated firsthand when each state delegate who spoke during the three-day convention was encouraged to state his or her name and “preferred” pronouns before addressing the assembly.

Pronouns I heard were he, she, they—and hex. One delegate even announced “they” had a uterus before addressing the assembly, apparently because that was something we all needed to know.

In the teachers union’s preamble, it says, “NEA is to be the national voice for education managed by and for the public good, to advance the cause for ALL individuals.”

However, as I read the 70 new business items and 40 amendments of bylaws, legislation, and resolutions, and listened to the platform speeches, it was obvious the NEA only represents those who hold the same ideologies and radical leftist political views.

From what I observed, the NEA’s goal is for public education to be a training ground for political activism, while demonizing anyone—including students and their families—who does not share those same political and sociological beliefs.

The NEA does not want public education to be neutral ground in developing critical thinkers with an emphasis on academic achievement.

Its priorities were apparent because of the 110 motions discussed and voted on, only four remotely addressed student academic achievement. Those four dealt with student financial literacy and resources for English learners and language acquisition.

Nearly half of the motions dealt with identity politics, social justice, and ways to promote the goals of the Democratic Party.

Some examples: broad-brushing police as biased and corrupt; mocking the Second Amendment as a societal harm; fighting for preferential treatment for any and all groups considered “marginalized,” especially nonconforming genders and infinite sexual identities; fighting misinformation in the media (that is, any media outlets that do not agree with their views); increasing abortion rights; adding seats to the Supreme Court; and advocating for more queer representation on school boards.

Close to 40% of the motions were related to protecting teachers’ jobs and increasing their benefits and their right to be social justice cadres. 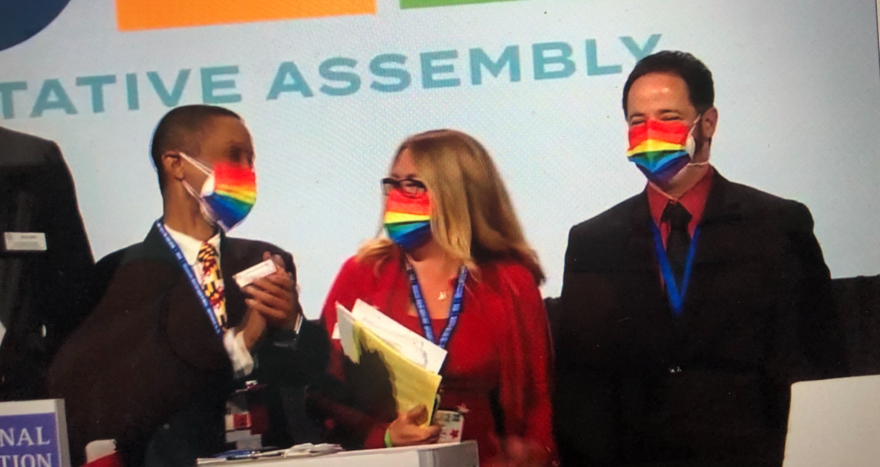 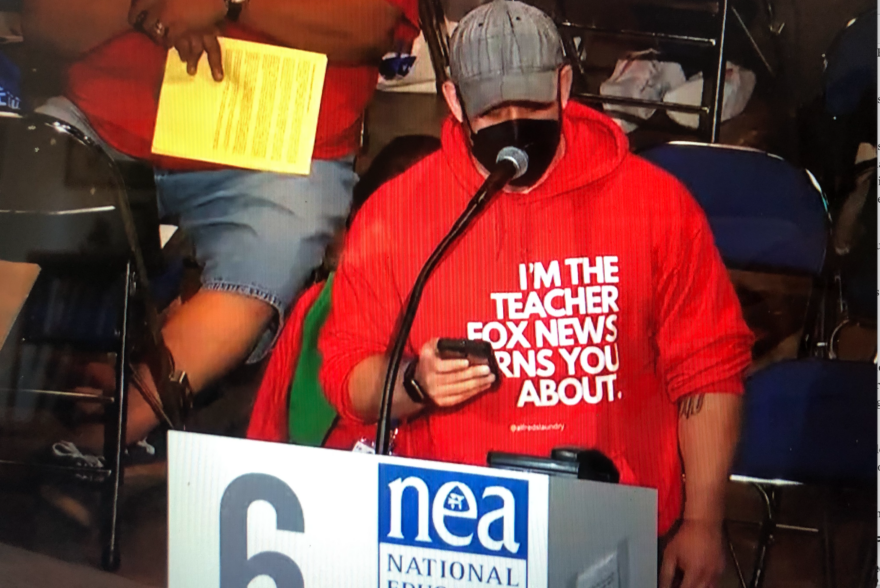 Although the NEA says it fights for nondiscrimination and civil rights, the only state delegates able to attend the Chicago event in person were those fully vaccinated. Any teachers who didn’t have vaccination cards could only attend virtually, regardless of whether they tested negative for COVID-19 or their reasons for not getting the shots.

The vaccinated delegates, who attended in person, had all expenses paid by their union local, while unvaccinated teachers were excluded and stigmatized as a “harm” to attendees. For a group that screams “My body, my choice,” the double standard is appalling.

On a positive note, the NEA voted down a new business item trying to mandate that all teachers in the nation be vaccinated. It lost, with 84% of the vote opposing.

Vice President Kamala Harris addressed the gathering on July 5 and repeatedly called Republican leaders in Washington “extremists.” According to the NEA’s executive director, Kim Anderson, “The Supreme Court has removed the right to marry someone of a different race.” (That’s flat-out false.)

She went on to say, “This Supreme Court and a significant number of radicalized elected officials have walked away from ‘freedom for all’ for an extreme discriminatory, exclusionary, misogynist, homophobic, out of touch, racist, cruel, corrupt ideology!”

Thanks for joining us at the #NEARA, @VP —and for being a fearless advocate for our right to organize and speak up for our students. https://t.co/1NsYtWHZqj

I spoke up during a debate opposing a new business item to create a smear list of organizations seeking to “dismantle public education due to diminishing freedoms of sexual and gender identities and honest education” — a smokescreen for critical race theory.

This was my virtual statement:

I, Brenda Lebsack, oppose [new business item] 15. NEA says they strive for a safe school climate for all, yet forget that, according to the 2021 Pew Research, 56% of Americans believe gender is based on biological reality. NEA does not believe this. NEA believes that a child can choose their gender based on their feelings and that there are infinite options and pronouns. How can public schools be a safe place for all students, when NEA leaders demonize over half of the families represented in our public schools?

If NEA creates a fact sheet of the organizations “dismantling” public education, please include NEA on that list.

As founder of the Interfaith Statewide Coalition and a teacher in California, I can tell you that many orthodox Muslims, Jews, Catholics, and Christians no longer feel public schools are a safe place.

Your social justice goals to assault family cultures that do not match your own, and to use public education to propagate extremist views, is wrong.  This is an abuse of power. That’s why I, as a teacher, support parent rights and school choice.

I was tempted to state my “preferred” pronouns as “Com, U, and Nism,” but I resisted the urge to do so. 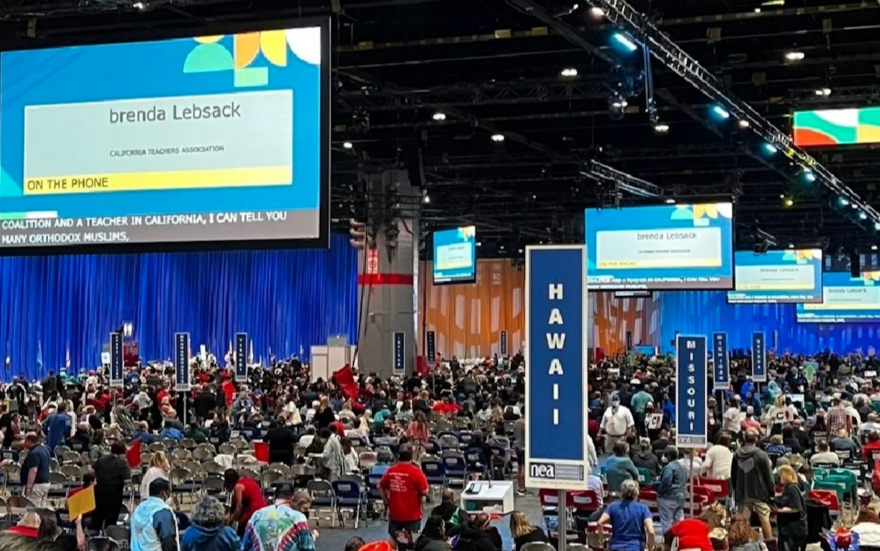 In conclusion, with respect to almost everything the NEA accuses others of doing, it is one of the biggest offenders.

America is in desperate need of educational reform because this powerful union, the National Education Association, has a delusional messiah complex and is using teachers and students as its political pawns.

After speaking out three times during the first two days of the convention, I guess I was making my California Colleagues upset.  On the third day, an angry mob of California delegates came to the mic and requested publicly, to NEA leadership, that a delegate from California be removed because this person does not represent the views of CTA.  The NEA Vice President, Princess Moss, denied the request and quickly adjourned for lunch.

However, on July 15, — coincidentally only three days after my article came out describing my NEA experience — I received an email from the California Teachers Association Executive Board that I am suspended from attending any union conferences for the rest of the year.

The reason they gave was due to a conference I attended back in April 2022 where I passed out papers with QR codes of documents showing how our union is taking away parent rights.

I appealed, saying it was hypocritical because our union scorns the use of punitive suspension with students saying it must be replaced with restorative practices in order to repair harm and build relationships. Our union even encourages this when a student curses a teacher out publicly. However, in my case, I am suspended and punished simply for sharing my views.

Parents, please don’t think your children will be exempt from this hypocrisy of treatment. If teachers must bow to the Union’s narrative, students will have to do the same.

A previous version of this editorial  was originally published in The Daily Signal with the title “Preferred Pronouns and More: What I Saw at Teachers Union Convention” on July 17. 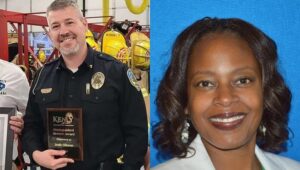