OPINION: No, Voting Should Not Be A 'Right'

Some Voters Are Better Than Others, So Voting Should Strictly Be Applied As A Privilege That is Earned And Preserved Through Diligence And Responsibility

To treat voting as a right is to say all votes are indiscriminately valid if the populous accepts the proposed standards. If the standard of direct democracy is the lowest-common-denominator voter, and the vehicle is the acceptance of widespread mail-in ballots with results delayed for days, then transparency be damned.

I moved to West Virginia two months ago and received an official Los Angeles County voter notice to my new address for next week’s midterm election. The notice wasn’t forwarded from my old residence, but rather addressed directly to my West Virginia address. My former landlord also said I received a mail-in ballot to my old California address.

Who the hell is keeping track of these ballots?

At minimum, the idea of mail-in ballots appears suspicious: having California election materials show up with my West Virginia address naturally made me suspect something fishy. For what reason would I receive voting material for Los Angeles County’s jurisdiction when I live in Berkeley County, West Virginia?

Upon employing my handy dandy Google machine, it turns out you have to “cancel” your voter registration upon leaving a state. Humor me if you will, but I lived in California for 30 years and the idea of cancelling my registration wasn’t a blip in my mind. If this is true, according to the Los Angeles County website, then I’m claiming ignorance: my faux pas. It’s a technicality, but it explains why I was issued a mail-in ballot at my old California address. However, barring some paperwork mixup between the post office and the Los Angeles County Registrar, I’m still left wondering why I received California voting material addressed to my West Virginia residence. If it’s typically standard to receive another state’s election material shortly after relocating, why am I not explicitly being told that? I’ve never relocated; as far as I knew, my California voter registration was cancelled upon registration in West Virginia early September — so why wasn’t I explicitly told I needed to go out of my way to cancel it?

I find it interesting politicians and celebrities harp on about registering and voting in elections, but I can’t say I remember Gavin Newsom or Lizzo saying, “By the way, if you leave the state, make sure you cancel your registration.” In fact, the sentiment has always suggested the opposite. Anytime I’ve heard politicians campaign restoring election integrity by “cleaning the voter roll” of deceased and people who don’t live in the state, it’s typically met with accusations of voter suppression. In addition, any questions raised about ballot transparency seems to be met with suggestions that you’re a conspiracy theorist contesting election results before the election is held.

The optics of mail-in ballots and official election material showing up for someone at the wrong address are horrible. If mail-in ballots look insecure, showing up seemingly at random to incorrect addresses, how do you plan to convince someone otherwise? If this is what democracy means, then democracy sucks.

Voting Is Too Easy

I’m going to make a bold claim: Some voters are better than others. Therefore, voting should strictly be applied as a privilege that is earned and preserved through diligence and responsibility. Voting should require a level of difficulty and skill to participate.

The other day I got into an argument about voting with my best friend, whom I love dearly. He admits he’s not well versed in politics and insists he doesn’t care much either way about who wins elections and therefore chooses not to vote — fair enough. I’d prefer someone who chooses not to vote rather than someone who votes for something they don’t actually understand. The latter seems to be a fatal characteristic of direct democracy by seeking the lowest-common-denominator-voter — a voting bloc that has little knowledge of politics, but is plentiful. He insisted, however, he deserved, by dint of citizenship, the right to receive a mail-in ballot should he decide to vote.

My argument was simple: voting should not be “easy.” You should have to jump through a hoop or two to vote. You need to have some skin in the game was my point. It makes no sense to allow an unemployed 18-year-old living in their parent’s basement to vote on which candidate gets to make decisions on foreign policy, home ownership, and economics. Some I’m sure are outliers, but they simply don’t have enough life experience or wisdom to understand the world the same way a middle-aged blue-collar home-owner with a wife and kids does.

I didn’t cast my first vote until 2016 after I was red-pilled watching Bernie Sanders get duped by his own party. My knowledge of politics was relegated to scoring brownie points by sharing memes on Facebook. I never read a bill. I never read a proposition. I couldn’t tell you the difference between a Democracy, Republic, or Oligarchy. Fascism meant anything I don’t like. I had no skin in the game. I was in my early-twenties, unemployed, flunking out of community college, and wildly uneducated about things I thought I understood about politics. If my parents had a basement, I would have lived in it.

I didn’t vote in elections prior to 2016 because voting was hard. I had to jump through hoops and I couldn’t have been bothered as an uninformed 18-year-old. But if I had a mail-in ballot sent to my address by default, I probably would have voted despite not knowing what I was voting for thus diluting the ballot of an informed voter.

It’s too easy for too many people to vote. Transparency is shunned and detractors are called conspiracy theorists and election-deniers. We used to have results tallied on election night — now we’ve been propagandized into waiting several days for results in the name of democracy. Mail-in ballots pander to the lowest-common-denominator voting bloc, which has led to the lack of transparency and the normalization of delayed results. The optics are horrible and it is a lie to claim otherwise. 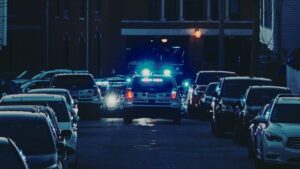