Kelly Dodd-Leventhal is a reality TV personality notorious for her polarizing takes both on- and offline. Her bio on Bravo’s RHOC page claims that her “political beliefs and tone-deaf jokes threaten her relationships with the women.” Dodd just incited another internet mob by making her dramatic exit from Twitter.

She announced that she deactivated her account yesterday with an Instagram post captioned, “Saying goodbye to my 211,000 Twitter followers…this is for you, trolls. It’s like having a toxic boyfriend. You like getting off but it’s not worth it in the end. There’s too much hate & too many fake accounts on this platform. It’s where the cancel culture was born & I’m done. Maybe if @elonmusk.ab takes over I’ll be back but until then you can find me on here.”

She also posted a screenshot of one of her final tweets: “I can see why @elonmusk is hesitating to buy @verified when Twitter is full of bots & spam accounts & I’m an actual person w/211k followers who gets written about daily & they still won’t give me my checkmark back. This platform is BS.”

Dodd’s verification mark on Twitter got revoked – a common occurrence for public figures who rustle feathers on the website. She expressed that she hopes the billionaire Tesla CEO does not acquire Twitter, calling it a “fake evil platform.”

The provocateur is no stranger to online controversy. Last year she posted a paid video on Cameo referencing a fan named Jennifer who listed preferred pronouns “she/her.” “You’re born a girl or a boy,” she stated in the clip. “I don’t get it. You’re Jennifer. I’m sorry, I don’t give a f— OK?”

The star received massive backlash and responded with another video on Instagram:

“I realize I have a habit of offending people and apparently I’ve done it again…I was just reacting in my own raw and unfiltered way…I’m not transphobic. I was just unfamiliar with the language. … We may have disagreements right? That doesn’t make me a bad person. If you want me to be tolerant, then you also need to be tolerant of me. That’s only fair.”

On another occasion, Dodd came under fire after dressing in Native American garb for Halloween alongside her Fox News anchor husband, Rick Leventhal. Most recently, she got slammed online for comparing the response to the recent school shooting in Uvalde Texas to that of the 9/11 terrorist attacks: “After 9-11 we didn’t ban planes. We secured the cockpits. Secure the schools,” wrote Dodd on her now nonexistent Twitter profile.

We can’t blame the former Real Housewife for ditching Twitter when she has left a trail of controversies in her wake. It’s hard (and arguably, impossible) to keep up with the ever-changing sensitivities of our day.

Trigger-happy mobs threaten to dogpile and mass-report public figures if they fail to use their platforms to amplify the latest astroturfed social messaging. The standards upheld by these online factions are unattainable by design. Kelly Dodd gave up on playing their game – other celebs and influencers should follow her lead. 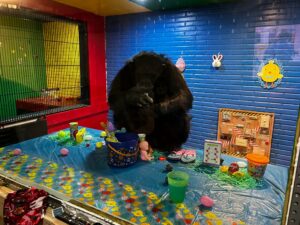 Trophy Hunting Tonka: One Woman’s Crusade to Protect a Beloved Chimp and PETA’s Victory Sending Him to a Notoriously Abusive Sanctuary