OPINION: Katy Perry Flees Hollywood for Kentucky, Says Becoming a Mom is the 'Best Decision' She Made in Her Entire Life

In a recent appearance on Chelsea Handler’s podcast Dear Chelsea, the 37-year-old pop star revealed that she had to redefine her idea of success for a new chapter of life: marriage and motherhood.

Katy Perry has carved out an illustrious music career in Los Angeles since the age of 17, but in the last month the Teenage Dream singer started living in Kentucky with her husband-to-be Orlando Bloom raising their daughter Daisy Dove, who turns two this August.

She also expressed that prior to her relationship with the Lord of the Rings actor, she didn’t experience strong maternal instincts due to personal “childhood stuff.” But when she witnessed Bloom’s interaction with his now 11-year-old son, Flynn, from his previous marriage to Miranda Kerr, her perspective on children shifted: “That definitely, primally influenced me. Something inside of me said, ‘You, mid-30s. This man is nice. Must breed.’”

Katy explained that becoming a mother changed her “definition of success” and reordered her priorities: “A lot of BS just falls away. Stuff that you thought was really important really was just never important. You don’t have time for any sort of energetic drama that’s not important in your family. Your family really starts to come first.”

The California Gurls singer described life in Kentucky as “quite an amazing experience. Because it reminds you that Hollywood is not America.” She noted that leaving Los Angeles has helped her understand people better. The pop legend stepped out of the insulated celebrity world: “They’re living in a bubble of sorts. We’re living in a bubble. Our bubbles are completely opposite…it’s interesting.”

Katy Perry’s new lifestyle subverts the expectations of Hollywood, where profits and publicity always take priority over private relationships. Katy was raised in the bubble of a devout Pentecostal community, then spent decades in the Hollywood bubble, and finally came out on the other side.

The singer hasn’t completely abandoned performing, however. She plans to return as a judge on American Idol and perform future shows for her Resorts World Las Vegas residency into next year.

While her fame and wealth may alienate her from sharing the experiences of many other moms, Perry is living out a positive example for finding a balance between career pursuits and family life. She proves that although you can’t ‘have it all,’ you can attain a slower, less vacuous existence than that which the entertainment world has to offer. 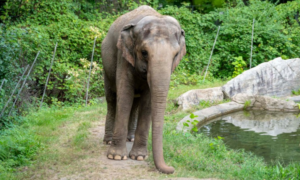 Is an Elephant a Human? New York Supreme Court Asked to Decide