The ‘Without Me’ singer interrupted her set in Pheonix to go on a tirade following the Supreme Court’s decision to overturn Roe v. Wade

Halsey performed in Mountainview, California, on the day of the Supreme Court’s ruling on Roe v. Wade and addressed her audience with a relatively measured response to the news. “I hope that we have cultivated a space where you have permission to feel however the f— you wanna feel tonight,” announced the pop star.

On the same day, she tweeted an obligatory post mourning the decision: “I have been advocating for abortion, reproductive rights, and bodily integrity for as long as I’ve had a platform and I’m running out of ways to word and frame the severity of the impact that fundamentalism has on our country.” At the very least, the artist kept her feelings about the issue from derailing her show that night.

She changed her tune while talking to the crowd in Arizona over the weekend. The singer launched into a tirade against the ruling, demanding that any members of the crowd who disagreed with her viewpoint exit the venue.

“Here in Arizona you guys got to promise me that you’re gonna do that work so that the person to the left of you and to the right of you has that right for the rest of their lives,” she said. “If you don’t like it, you can go home right now — I don’t care. If you don’t like it, I don’t know why you came to a Halsey concert because I have never been shy that this is how I feel.”

The crowd erupted in applause at the speech and followed the artist in a rage-fueled chant of “my body, my choice.” Halsey then performed her 2019 single titled “Nightmare,” an edgy, anthemic track that dredges up the grievances of her mostly young and impressionable female fanbase: “I’ve been polite, but won’t be caught dead / Letting a man tell me what I should do with my bed.”

Attendees witnessed a noticeable swath of the crowd walk out of the show after the musician’s rant concluded. One exclaimed on Twitter that “THE AMOUNT OF PEOPLE WHO JUST WALKED OUT OF THE HALSEY CONCERT AFTER NIGHTMARE WHEN SHE SPOKE ABOUT ABORTION WAS SICKENING. FIGHT FOR WHAT IS RIGHT. #AbortionRightsAreHumanRights #MYBODYMYCHOICE.

Some fans were understandably displeased that Halsey distracted from her performance and brought a political debate into a night they looked forward to for months. “People attend concerts to enjoy the performers’ music, not unexpectedly get lectured on political or social issues that clash with their beliefs. Just because other patrons disagree with you, this doesn’t make them bad people,” wrote another Twitter user.

Halsey even took to Twitter to double down on shunning concert-goers who didn’t appreciate her abortion rant: “downside of doing outdoor venues: no door to hit them on the way out.”

The singer would prefer to stroke her own ego thinking that she’s an underdog heroine for turning away fans with archaic attitudes toward women. More likely, fans were sick of standing around outside and could barely stay awake through her self-aggrandizing lecture.

A fan who supported her pro-choice message tweeted, “I waited the whole show for her to sing nightmare and give her speech and left after because I have a five hour drive home and wanted to beat traffic leaving the venue. Not everyone left because of what she said. It was my favorite part of the show.”

It’s doubtful that Halsey lost any fans for speaking out on abortion. But her mid-concert rant did betray a sore lack of integrity. Evidently, she doesn’t believe she can be judged on the merits of her artistic output alone, and instead bludgeons her audience with pandering statements on issues that her radio-friendly music isn’t meaningful enough to address. 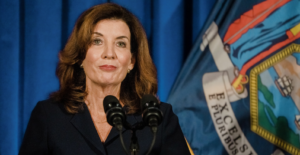