Perhaps the road to unity involves not appealing to the left or the right, but to fundamental human goals like being a responsible parent

Mass shootings seem to me to have escalated into a war between citizens. I’m saddened that it’s come to this, but sadness isn’t helpful in a conversation like this except as a fire-starter.

I care about my fellow American citizens, and though I know runaway emotions’ true nemesis is properly-applied logic, I’m not here to argue statistics. Math isn’t the only form of non-emotional reasoning, and it is unlikely to persuade anyone in the grip of histrionic thinking.

Instead of leaning into statistics, as conservatives seem wont to do, or into the emotions, which the left is far better with than I will ever be, I am taking another path: I contest that this particular argument is better made by appealing to common humanity and promoting the idea that everyday citizens have a right to become potentially-lethal threats when faced with — and perhaps appealing to — parental love of children.

In a war, the only proper response to a threat is an equal and opposite reaction — and the preparation to handle potential the threat by having weapons, and knowing how to use them. (See Jordan Peterson’s definition of “meekness“). The harsh reality that political pundits on both sides of the aisle seem to obfuscate is that no one person has the tools to make the positive changes we all want. No president, no candidate, no pundit can change the culture so that boys have fathers in their lives instead of antidepressants and video games. There is no top-down solution to the problem of nihilism faced by young children. No empowering female role model can stop the spiral of feminine discouragement and loss brought on by cultural tides.

Political pundits make hay off the frustration and disillusionment that ordinary individuals face because everyday citizens don’t realize that it simply isn’t in their power to make the grandiose, utopian changes they seek; this is why I always recommend people involve themselves at the local events instead of focusing on the federal level. It seems trite to say, but bigger institutions, like long trains, are harder to stop or redirect. Big changes require patience. They require the careful setting-down of each domino so that a schoolboard member wins a race, or a county commissioner, or a mayor.

I contend that it’s freeing to recognize that an ordinary individual is better served by focusing small. While I mention politics, it’s pivotal to make these changes from the ground up, and that means this independent mindset applies even closer to home and, even more practically, to taking responsibility for their families’ safety.

Normal people can take steps like training themselves in situational awareness by taking self-defense classes, and by having their own mental action plan of what it would look like to face a real, lethal threat in every new environment they enter. I know this is asking a lot of a hassled mom or an overworked dad, but every parent who truly wants the best for their children needs to know that they could someday be in the situation of the Uvalde parents: stopped outside the school, desperately trying to get in to face a real and present danger to their children. Perhaps the road to unity involves not appealing to the left or the right, but to fundamental human goals like being a good and responsible parent. Even amid all my cynicism of the human race, the willingness of a parent to sacrifice for their child still gives me great hope. It’s one of the last pure motivations of humanity. (I suspect that Democrats are about to find that uniting parents against them will not work in their favor, but that remains to be seen).

A nuanced problem requires deep thought and pragmatic cultural solutions, but what we tend to get is maudlin political theater in an ad nauseum loop with no real handle on either side of what humans actually believe: The right seems to think people will be persuaded by facts and logic; the left seems to dismiss the human desire to take responsibility and pursue justice, even without institutional support, like the Uvalde dad who sprang into action to save his family by borrowing his barber’s gun and helping evacuate the school.

I think the endless loop of logic versus fraught emotional arguments is frustrating to even the most hyperbolic anti-gun activists, and it intrigues me that a seemingly simple (but not easy) solution that emphasizes personal responsibility and independence could be the beginning of exerting societal pressure back against our troubling cultural contagion of gun violence. Increasing the value of fathers to the everyday person, emphasizing the role of personal independence, and encouraging acts of heroism are all great places to start, and these ideas don’t come from the top down; they come from the bottom up, and the deck is stacked against them: no one in the government wants mothers to be free from the welfare state, therefore they are motivated to keep fathers irrelevant and irresponsible. No institution wants people to think for themselves.

There is a problem here, and we are the only people who can stop it. All of us, as a culture, need to join together against the forces that want us unarmed, vulnerable, and isolated physically and emotionally from our spouses and children. Hopefully the egregious actions schools are taking to sexualize children will be the red pill to the mammoth demographic of parents. 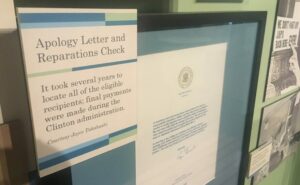