Yesterday, Demi Lovato made an appearance on the Spout podcast hosted by Tamara Dhia where she broached the subject of her gender identity and preferred pronouns. Lovato made a rather personal announcement: she is no longer going by “they/them” pronouns because she’s back in touch with her feminine side.

The global superstar revealed this news when asked about the reasoning behind her chosen pronouns. “I’m such a fluid person that…I felt like, especially last year, my energy was balanced in my masculine and feminine energy,” Lovato explained.

Lovato originally announced in May 2021 that she identified as nonbinary on an episode of her own podcast hosted by OBB Sound, 4D with Demi Lovato. At the time, the pop star seemed very confident in her new gender identity.

“Over the past year-and-a-half, I’ve been doing some healing and self-reflective work. And through this work, I’ve had the revelation that I identify as nonbinary. With that said, I’ll be officially changing my pronouns to they/them,” stated the then 28-year-old performer.

The singer seems to make a worrying association between feeling a lack of feminine or masculine energy and “feeling human.” Former child stars are prone to identity crises – it’s incredibly easy to take a stab at why that is the case.

Demi got her start as an actress on Barney and Friends alongside her fellow rising star, Selena Gomez. As a 29-year-old lifelong performer, she’s now processing her unconventional upbringing and recovering from addiction, as was explored in her official documentary, Simply Complicated (2017).

For young women in the entertainment industry, appearances trump everything else. Lovato had to adopt a sexually mature image as a pop star after growing up in the public eye.

Now, after expressing deep discomfort with womanhood, she has taken up the Sisyphean effort of controlling how social media and the press perceive her, rather than conducting a sincere inquiry into how she perceives herself. Having once sung the lyrics “You make me wanna act like a girl / Paint my nails and wear high heels” on her 2013 hit “Heart Attack,” Lovato clearly has some questions about femininity that need answering.

Her new album “Holy F—” is dropping on Aug. 19. Based on the sound of recent singles “Skin of My Teeth” and “Substance,” fans anticipate a nostalgic return to the vocalist’s edgy pop-rock sound. It just so happens that Lovato reducing her identity crisis down to a question of which pronouns she prefers to be called will benefit her music career by astroturfing her name back into the headlines. 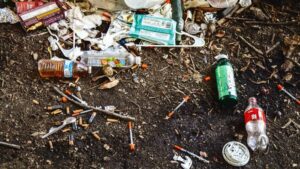