OPINION: Critics of Upcoming ‘Elvis’ Biopic Propose a Boycott Due to Allegations He Groomed His Wife

Biopics are all the rage in cinema at the moment, and Baz Luhrmann’s highly anticipated biographical feature on Elvis Presley is no exception. ELVIS premiered at Cannes Film Festival on May 25th, receiving a 12-minute standing ovation. The cultural icon’s only daughter, Lisa Marie Presley shared on Instagram that she found it “nothing short of spectacular. Absolutely exquisite.”

Although critics offered mixed reviews, the rock-and-roll pioneer’s ex-wife Priscilla Presley has showered the film with praise since she saw an early private screening last month.

The 77-year-old took to Facebook to applaud the director and Austin Butler, the rising star who plays her late husband: “It is a true story told brilliantly and creatively that only Baz, in his unique artistic way, could have delivered. Austin Butler, who played Elvis is outstanding…Bravo to him…he knew he had big shoes to fill.”

The Naked Gun actress’ overwhelmingly positive reception to the film prompted some to take a closer look at her tumultuous relationship with Presley.

A Twitter thread blew up yesterday calling on audiences to boycott the upcoming biopic over concerns that Elvis groomed and abused his wife. The thread included clips from Priscilla’s 1985 interview with Barbara Walters, where she detailed dark aspects of the marriage in an incongruously lighthearted tone.

Priscilla Beaulieu met Elvis at a party during his military deployment in Germany in September 1959. She was 14, while he was 24. Elvis charmed Priscilla, and a romance developed between them until he returned to the United States in March 1960.

They communicated via letters while Elvis was dating actress Anita Wood. Wood reported to Express that in 1962, she found a letter from Priscilla that confirmed her suspicions of Elvis’ cheating. “He took me and he shoved me up against the closet. He was so mad at me, just livid because I had found the letter,” she recalled.

He insisted that his communication with Priscilla was benign: “This girl, again, she’s just a child. She’s just a fourteen-year-old child, it means absolutely nothing. She just wants to visit, it means nothing.” Elvis had 15-year-old Priscilla move in with him soon after, and the couple got married in 1967, when she was 21.

Priscilla told Barbara Walters that Elvis refused to be intimate with her for those six years, because he “wanted a virgin.” He was also violent at times – she specifically recounted him giving her a black eye and throwing a chair at her.

In multiple instances, he gave her sedating pills – the first time, she was knocked out for two days. They also touched on his fascination with corpses. Priscilla laughed as she recalled more than one occasion when Elvis took her to a morgue for his own “thrill.”

The couple divorced in 1973 after six years of marriage.

The revelation of these disturbing details is juxtaposed with Priscilla’s apparent fondness for her late husband to the present day. She walked the Met Gala carpet alongside Austin Butler in full support of the film honoring the music legend’s memory.

Ultimately, it is left up to the discretion of viewers whether they should support Luhrmann’s glamorized portrayal of Elvis. He remains a legendary artist; like many artists, his private life was deeply troubled, and a select few people truly knew the content of his character.

The biopic is set to release in North America on June 24th. Hopefully, audiences will find artistic merit in the film despite the sinister realities of the musician’s personal history. 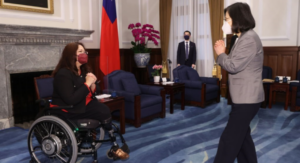 US Senator Tammy Duckworth Visits Taiwan for the Second Time