OPINION: As Shia LaBeouf Awaits Trial for Sexual Battery, His Upcoming Role as a Catholic Saint Gives Hope for Redemption

Abel Ferrara’s biographical film about 20th century Italian saint Padre Pio (titled after his namesake) is set to premiere at Giornate degli Autori, an independent event that coincides with the upcoming 79th annual Venice Film Festival. Shia LaBeouf plays Padre Pio, born Francesco Forgione, a late Franciscan Capuchin friar who was canonized as a saint in the Catholic Church in 2002.

In a recent revelatory interview with Bishop Robert Barron, founder of Word on Fire Catholic Ministries, LaBeouf revealed that his endeavor to prepare for the role led him to convert to Catholicism and let go of his ego. However, while The Peanut Butter Falcon star anticipates critical reception of his performance as a pious mystic, controversy looms over his personal life.

The actor is awaiting trial in April 2023 for a sexual battery case filed by singer-actress FKA Twigs in December 2020. Twigs, whose real name is Tahliah Debrett Barnett, met Shia in 2018 on the set of his autobiographical film Honey Boy, and they dated for under a year.

Barnett’s lawsuit alleged that LaBeouf inflicted emotional distress, physically abused her, and knowingly gave her an STD. “What I went through with Shia was the worst thing I’ve ever been through in the whole of my life,” Barnett told the New York Times. “I don’t think people would ever think that it would happen to me. But I think that’s the thing. It can happen to anybody.”

LaBeouf’s initial response in an email to the New York Times sounded apologetic: “I have no excuses for my alcoholism or aggression, only rationalizations. I have been abusive to myself and everyone around me for years. I have a history of hurting the people closest to me. I’m ashamed of that history and am sorry to those I hurt. There is nothing else I can really say.”

In February 2021, Rolling Stone reported that LaBeouf’s lawyer took a different tone, entirely denying the validity of the abuse allegations. LaBeouf officially “denies that Plaintiff [FKA Twigs, real name Tahliah Barnett] has sustained any injury or loss by reason of any act or omission on the part of Defendant, and denies that Plaintiff is entitled to any relief or damages whatsoever.”

If the accusations leveled at LaBeouf are even partially true, it will be a tremendous feat for him to convincingly portray a man of remarkable sanctity. That’s not to suggest Padre Pio was universally revered by his contemporaries. Fr. Agostino Gemelli, a physician and psychologist commissioned to investigate Forgione’s stigmatic wounds, concluded that they were self-inflicted and called the friar “calm, quiet, meek, more because of the mental deficiency than out of virtue.”

Giornate degli Autori’s website describes the protagonist as “a visionary since childhood, he was a troubled, questioning youth, struggling to find his true calling and place in the eyes of his Lord.” LaBeouf had to draw upon his own inner turmoil for inspiration to authentically retell the story of Forgione’s ministry after the devastation of the first World War.

Viewers aware of the controversy surrounding LaBeouf will be challenged to believe in his redemption. It’s entirely possible that Shia psychologically or physically hurt Twigs while lost in egomania. He even admitted to Bishop Barron that “God was using my ego to draw me to Him. … there would have been no impetus for me to get in my car, drive up [to the monastery] if I didn’t think, ‘Oh, I’m gonna save my career.’”

Despite the star’s past being shrouded in controversy, his conversion could very well be genuine. Obviously, we are not privy to the inner workings of Shia’s relationships and spiritual journey. But audiences are desperate for realistic stories of redemption at a time where anyone teeters on the edge of getting de-personed over the smallest offense.

Shia LaBeouf chose to portray a man whose suffering bore significant meaning. It could offer hope to contemporary audiences that LaBeouf’s self-destructive behavior, and the suffering it caused others in the process, may also bear fruit in the service of art. As Oscar Wilde wisely stated in his satirical play A Woman of No Importance, “Every saint has a past, and every sinner has a future.” 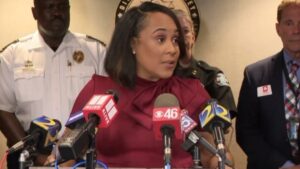