One of the two “severely decomposed” bodies found in a Rhode Island home is now confirmed to be former Woonsocket Mayor Susan Menard.

Two bodies, one elderly male and one elderly female, were found in Menard’s home on September 19 after a neighbor noticed a foul smell and called the police.

Happening now: Police in #Woonsocket have a home on Marian Lane blocked off with yellow tape — where two bodies were found “severely decomposed” inside, according to the police chief. An investigation is now underway.

According to a report from NBC News, the Office of the State Medical Examiners at the Rhode Island Department of Health told them that “the identity of the second decedent has not yet been finalized.”

The neighbor said that they had not seen Menard or her husband in about a week. Police have not released an estimate on how long the bodies were left in the home after death.

Police Lt. Matthew Richardson confirmed to The Valley Breeze that the deceased were in an “advanced state of decomposition.”

The bodies were found in separate rooms, both on the first floor of the home, after police breached a back window.

Woonsocket Police Chief Thomas Oates told local station WPRI that the home was secured and there were “no outward signs of any foul play or any type of struggle.” He told NBC News that both of the individuals they believed to be the deceased had “pretty significant” medical issues.

However, the medical examiner had not finalized the causes of death by September 21.

Menard’s brother Robert Miller, 81, passed away on Saturday, according to an obituary published in the Providence Journal. He was a Toxicologist for the RI Department of Health for 30 years. A report from USA Today stated that it is “unclear whether one of the bodies was his.”

Menard was listed as a surviving relative in the obituary. His funeral is scheduled to take place on Thursday.

Woonsocket Mayor Lisa Baldelli-Hunt said in a statement to NBC News, “On behalf of the residents of the city and employees of the city of Woonsocket, we extend our deepest condolences to her family and friends.”

Menard was the longest-serving mayor in Woonsocket’s history and the second elected female mayor in the history of Rhode Island. She had a middle school named after her in 2017. 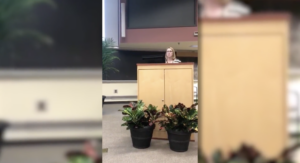