The Clinic's Website Appears To Be Down As Of Wednesday Afternoon

Best-selling author Matt Walsh reported on Tuesday that a Tennessee transgender clinic running in conjunction with Vanderbilt University Medical Center was performing surgeries and other medical procedures on minors.

“BREAKING: My team and I have been investigating the transgender clinic at Vanderbilt here in Nashville. Vanderbilt drugs, chemically castrates, and performs double mastectomies on minors. But it gets worse,” Walsh reported in a Tuesday Twitter post.

BREAKING: My team and I have been investigating the transgender clinic at Vanderbilt here in Nashville. Vanderbilt drugs, chemically castrates, and performs double mastectomies on minors. But it gets worse. Here is what we found. Let's start at the beginning.

The clinic was opened by Vanderbilt in 2018 and had previously reported transgender surgeries were a “big money maker” which required a lot of follow ups, according to Dr. Shayne Taylor in a video Walsh shared for context in a follow-up tweet.

“Insurance carriers are mandated to cover medical expenses for trans folks,” said Taylor in regards to the Affordable Care Act. “These surgeries make a lot of money.”

Female to male chest reconstruction could bring in $40,000 and routine hormone treatments would garner several thousands for the hospital, Taylor said. Bottom surgeries like vaginoplasty would reportedly bring in around $20,000 — which Taylor claimed may be an underestimate, not including additional charges associated with the patient’s hospital visit.

Taylor also said some surgeries could bring the hospital up to $100,000 in insurance payments and claimed other transgender clinics were entirely supported by male to female surgeries known as a phalloplasty.

In a follow-up tweet, Walsh reported on another doctor affiliated with Vanderbilt, Dr. Ellen Clayton, who claimed religious objections to transgender surgery was “problematic” and threatened “consequences” for any doctors objecting to participate in transgender surgeries.

Vanderbilt also runs a program called “Trans Buddies” which ensures compliance with their clinic’s transgender policy by appointing trans activists to attend appointments with patients, including children, who further report on misgendering, according to Walsh.

In another tweet, Walsh reported that Vanderbilt had admitted to providing “irreversible hormone drugs to children as young as 13.”

After they have drugged and sterilized the kids, Vanderbilt — as explained in this video presentation by plastic surgeon Julien Winocour and Physician’s Assistant Shalyn Vanderbloemen — will happily perform double mastectomies on adolescent girls. pic.twitter.com/SRvtytflsk

“Vanderbilt got into the gender transition game admittedly in large part because it is very financially profitable. They then threatened any staff members who objected, and enlisted a gang of trans activists to act as surveillance in order to force compliance,” Walsh said. “They now castrate, sterilize, and mutilate minors as well as adults, while apparently taking steps to hide this activity from the public view. This is what ‘health care’ has become in modern America.”

“The ‘pediatric transgender clinic’ at Vanderbilt University Medical Center raises serious moral, ethical and legal concerns,” Lee said in a statement to The Daily Wire. “We should not allow permanent, life-altering decisions that hurt children or policies that suppress religious liberties, all for the purpose of financial gain. We have to protect Tennessee children, and this warrants a thorough investigation.”

The governor of Tennessee is calling for an investigation into Vanderbilt after my report this afternoon. Legislators on the state and national level have also responded. We are not going to let up. We will shut this down.

On Wednesday, following Walsh’s report, Vanderbilt’s transgender clinic’s section on their website was reportedly down.

BREAKING: After my report, Vanderbilt’s transgender clinic has deleted their entire website. Literally the whole thing. They’re removing everything. pic.twitter.com/9kAbORA7OY

“Don’t worry, we knew this would happen and have spent the past week saving videos and screenshots. We have it all. They can’t hide it now,” Walsh noted in another tweet. 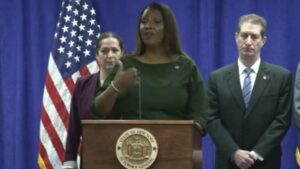