Police were called to the Santa Fe movie set on Oct. 21

A cinematographer was killed after Alec Bladwin fired a prop gun on the set of the new Western film “Rust” at Bonanza Creek Ranch in Sante Fe.

The film’s director, Joel Souza, 48, was also injured during the Oct. 21 incident. He was taken to Christus St. Vincent Regional Medical Center for emergency care.

Director of photography Halyna Hutchins, 42, died at the University of New Mexico Hospital in Albuquerque.

“I don’t think there are words to communicate the situation,” said Hutchins’s husband, Matthew Hutchins, 38, in a telephone interview with Business Insider. “I am not going to be able to comment about the facts or the process of what we’re going through right now, but I appreciate that everyone has been very sympathetic.”

He added: “I think that we will need a little bit of time before we can really encapsulate her life in a way that is easy to communicate.”

Baldwin, who plays a lead role and is also one of the film’s producers, was photographed outside the Santa Fe County Sheriff’s Office on the phone appearing to be in tears.

In a statement on Twitter, Baldwin called the incident a “tragic accident” and described Hutchins as a “deeply admired colleague.”

1-
There are no words to convey my shock and sadness regarding the tragic accident that took the life of Halyna Hutchins, a wife, mother and deeply admired colleague of ours. I'm fully cooperating with the police investigation to address how this tragedy occurred and

Sheriff’s office spokesman Juan Ríos said the 68-year-old actor had gone to the office willingly to provide a statement.

“This investigation remains open and active. No charges have been filed in regard to this incident. Witnesses continue to be interviewed by detectives,” the sheriff’s office said in a press statement released on Thursday night.

Investigators are reviewing how the shooting occurred and what type of projectile was discharged, according to the statement.

The New York Post reports witnesses have said Baldwin repeatedly asked why he has been handed a “hot gun.”

“In all my years, I’ve never been handed a hot gun,” the actor allegedly kept saying.

The prop gun was likely loaded with blanks and had shrapnel stuck inside it, experts told The Post.

“Traditionally, the prop master or armorer is responsible for firearms and firearms safety on a set such as Rust,” per Deadline.

An old tweet from Baldwin has resurfaced in the wake of the incident in New Mexico.

In 2017, Huntington Beach police officer Eric Esparza fatally shot Dillan Tabares, 27, who’d punched him and reached for his gun. The shooting was caught on film and later found to be justified.

“I wonder how it must feel to wrongfully kill someone,” Baldwin tweeted at the time.

Sources close to the actor have expressed concerns for Baldwin.

“Alec is absolutely devastated, distraught, in shock and in disbelief how this could have happened,” an unnamed source told The Post. “He’s a fragile guy, and we don’t know how he will ever come to terms with this.”

Rust Movie Productions said in a statement that “production has been halted for the time being” and that “the safety of our cast and crew remains our top priority.” 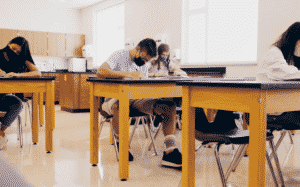 Parents Sue Illinois State Board of Education Over Mask Mandate