An Oklahoma elementary school cafeteria worker has been arrested and charged with solicitation and child pornography after being busted by Predator Poachers in a sting.

In a video filmed by the pedophile-hunting group, Davis admits that he came to meet an 11-year-old for sex — as well as possessing child pornography of infants.

The To Catch a Predator-style bust culminated in Davis being arrested and charged.

Alex Rosen of Predator Poachers told Timcast News, “Robert Davis is one of many people that work in elementary schools that prey on children. Keep your head on a swivel.”

Robert works in the cafeteria at Kirkland Elementary. While not being an actual teacher, I shouldn’t have to explain how his presence in the same vicinity of children is dangerous. I do have a couple questions for the school district regarding their vetting procedures. (2/8) pic.twitter.com/2JZt7xTGF9

“Robert works in the cafeteria at Kirkland Elementary. While not being an actual teacher, I shouldn’t have to explain how his presence in the same vicinity of children is dangerous. I do have a couple questions for the school district regarding their vetting procedures,” Rosen tweeted with photos of Davis.

Robert was promptly arrested on the spot and charged with solicitation and possession of child pornography. Big shout out to our LIVE decoy that helped make it possible @etxmama21. Go follow her! (6/8) pic.twitter.com/PaTgGo7hYe

Rosen added, “this should be a concern to everybody. It doesn’t have to be a teacher for it to be an issue. These people infest our school systems, and pretty easily from the looks of it. This is the 2nd Elementary School employee we have busted in less than a month.”

Timcast also spoke to the woman who acted as a decoy to help catch Davis.

“As a teen victim of sex crimes myself, doing decoy work is super therapeutic and healing for me,” the woman, who goes by Decoy Madddi told Timcast. “It helps me to feel a sense of justice for my younger self as well as all the kids out there who are vulnerable to these situations. I have a daughter of my own, so helping spread awareness about these guys helps me to feel like I’m making the world a better place for her.”

Predator Poachers rely on donations to continue their work. You can support them by visiting their page on Locals.

We travel nationwide doing this. An operation funded by and for the people. If you want to help support us and keep this movement going — Please consider joining our Locals. We release content on there early as well as other exclusive stuff (7/8) https://t.co/FVN9QvJsjG

Timcast has reached out to Kirkland Elementary for comment and will update this story if one is provided. 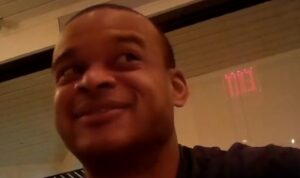