NYC Mom Shot in Head While Walking to Grocery Store

A New York City family is mourning the loss of a woman who was fatally shot in the head while walking to the grocery store the day after Christmas.

Valeria Ortega, 64, was struck by a stray bullet around 11:31 a.m. at the corner of Dyckman St. and Vermilyea Ave., several blocks from her home.

Police say Ortega was an innocent bystander in a shooting involving two moped drivers and a separate driver in a sedan.

“[The individual] in the car fired in the direction of the mopeds,” the New York Post quoted local police as saying. “No one else was struck.”

Hours later, her blood-stained scarf remained next to a pool of blood as police continued their investigation. A local vendor who witnessed the event recalled hearing at least three gunshots before seeing the woman collapse onto the sidewalk.

“She wasn’t moving, and it was in the head that she got hit,” vendor Luis Senfleur told local news affiliate ABC 7.

“I thought it wasn’t real, the shot,” Senfleur told the Post. “But when I saw her fall, I said … ‘They’re real.’ I was the one that was supposed to call immediately but I get nervous. You know, I’ve never been in this situation.”

He told reporters that the violence in his New York City neighborhood is “getting worse.”

Ortega’s son, who saw his mother laying on the sidewalk shortly after the shooting, was comforted by his weeping father, Vicente Garcia, who described his late wife as a “doting mother” who was “generous and kind almost too much for her own good,” the Post reported.

The shooting incident happened just minutes after a 26-year-old man was shot and seriously injured about a half mile away. Police say they have not yet discovered a motive in either shooting and that they do not appear to be connected.

There have been 22 shootings in the 34th Precinct in 2022, which is lower than the previous year, according to CBS News.

City-wide, a report from the New York Police Department shows 1,549 shooting victims from the beginning of the year through Christmas Day — a 16.3 percent drop from the year prior. 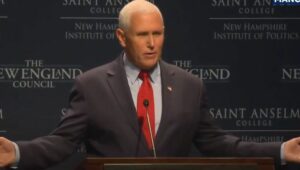