Felons in North Carolina that are not currently incarcerated can now register to vote amid ongoing legal turmoil.

The State Board of Elections announced it would update its website, voter registration forms, and other voting-related documents to include information for felons looking to register.

Since the 1970s, North Carolina law has barred anyone serving a felony sentence from registering to vote – including people who were no longer behind bars but were completing probations, post-release supervision, parole, or any other form of supervision.

A person who is in jail awaiting trial for a felony charge retains their right to vote.

The Community Success Initiative of Raleigh challenged the law in 2019, arguing that it violated constitutionally guaranteed rights.

At the time, New Jersey’s then-Governor Phil Murphy had signed into law a bill that allowed 80,000 felons on parole or probation to vote and Kentucky Governor Andy Beshear has restored voting rights to 140,000 nonviolent offenders who have completed their sentences, including jail time and parole, but who haven’t paid fees or fines relating to their convictions.

Dennis Gaddy, the group’s co-founder, told NBC News, “People work and pay taxes. I just believe that they ought to have the right to vote.”

In March of 2021, Superior Court Judge Lisa Bell upheld the group’s objection. Bell wrote in her decision that the law “violates the state constitution largely because it discriminates against Black residents.”

Republican legislators filed an appeal and secured a temporary stay of Bell’s decision. Subsequently, a panel of three judges affirmed that the law was discriminatory and therefore unconstitutional. While the decision is being appealed, the panel ruled its decision would go into effect by July 27 and ordered the Board of Election to take action by that time.

“For the time being, any person serving a felony sentence outside of prison or jail is eligible to register to vote and vote. Those in jail or prison for a felony conviction are not allowed to register or vote,” the board announced on July 26.

The board added it “will update this information upon any further order of the courts.”

In addition to being released from jail, felons must be over the age of 18 by the next general election and have resided in the state for at least 30 days prior to the election.

The North Carolina Supreme Court agreed in May to hear the appeal of the panel’s decision but the case is still pending. If the Court does not intercede before November, felons that are no longer in jail will be able to vote in the 2022 general election.

There are roughly 7.3 million registered voters in North Carolina. The Community Success Initiative estimated in evidence submitted to the court that about 56,000 people had not been able to vote in 2020 because of the state’s law. 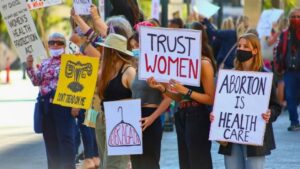 Democrats Introduce Bill to Fund Abortions Around the World