North Carolina Governor Roy Cooper vetoed a bill that would compel the state’s sheriffs to cooperate with Immigration and Customs Enforcement.

The state legislature sent Senate Bill 101 to Cooper on July 1 after it passed the Senate following a 25-19 vote. The House had backed the bill one day earlier with a 65-47 vote.

“This law is only about scoring political points and using fear to divide North Carolinians,” Cooper said in a message accompanying his veto. “As the state’s former top law enforcement officer, I know that current law already allows the state to incarcerate and prosecute dangerous criminals regardless of immigration status.”

“This bill is unconstitutional and weakens law enforcement in North Carolina by mandating that sheriffs do the job of federal agents, using local resources that could hurt their ability to protect their counties,” the governor added.

The policy requires the administrators of detention centers such as county jails, district confinement facilities or work release units to determine a prisoner’s residency status by inquiring, reviewing relevant documents, or sending an official query to ICE.

In addition to clarifying the responsibilities of sheriffs who have illegal immigrants in custody, SB 101 notes that a prisoner that is not required to remain in custody by “other legal process” can be released either 48 hours after receipt of the detainer and administrative warrant, when ICE takes custody of the prisoner, or if the detainer is rescinded by ICE.

State Representative Carson Smith is a former sheriff of Pender County who supports the bill as a matter of common sense.

“If you’re illegal and a sheriff’s holding you for violating a serious law, my goodness, why wouldn’t we let the feds know about that?” Smith told The News & Observer.

“With the stroke of his pen, Gov. Cooper just gave sanctuary sheriffs permission to shield an illegal immigrant who rapes or murders a North Carolinian,” said state Senator Chuck Edwards, the bill’s chief sponsor, in a statement to the press.

An immigration advocacy group thanked Cooper for his veto, calling the bill “an effort to rally anti-immigrant sentiments ahead of the upcoming elections.”

“We’re glad the governor did right by his immigrant constituents and vetoed SB 101. We’re thankful for our community for fighting against this anti-immigrant bill,” Iliana Santillan, the executive director of  El Pueblo, said in a statement per WRAL.

The bill now returns to the legislature where lawmakers will attempt to win support for an override vote. North Carolina’s legislature is next in session on July 26. 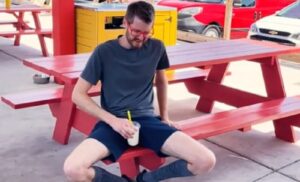