A ship operated by a migrant charity will not leave an Italian port despite orders from the government until all of its migrant passengers have been permitted to go ashore.

The incident is a public challenge to the nation’s new right-wing government, led by Prime Minister Giorgia Meloni. The government does not permit ships that pick up migrants found at sea who are attempting to illegally migrate to Italy to disembark. Only those people considered to be vulnerable or in need of immediate medical assistance are allowed to leave the ships.

Charity ship Humanity 1 disembarked 144 migrants – including 100 unaccompanied minors – at the port of Catania on Nov. 6. The Italian government ordered the vessel to stop and leave the port. Humanity 1 refused to comply.

SOS Humanity, the German nonprofit organization that operates the ship, said the captain will not leave the port until the remaining 35 migrants are allowed to disembark in Italy.

“Maritime law obliges him to bring all those rescued from distress at sea to a place of safety,” the organization tweeted. “The survivors have the right to an individual protection assessment, which can only take place on land. Turning back the 35 people on board Humanity 1 seeking protection from territorial waters is a form of collective refoulement and therefore illegal.”

1/2 🔴Breaking: At around 11:30 am, the #Humanity1 was asked to leave the port of #Catania with 35 survivors on board. The captain has refused this order. Maritime law obliges him to bring all those rescued from distress at sea to a place of safety. pic.twitter.com/SiyjCOjtR3

SOS Humanity accused the Italian government of violating the European Convention on Human Rights and announced its plans to take legal action in Catania to ensure “the right to access a formal asylum procedure is guaranteed.”

The majority of migrants who attempt to reach Italy by sea are from North Africa. Breitbart reported in August that 50,000 illegal immigrants had entered the country in 2022 alone with analysts predicting at least 77,000 would enter by the end of the year.

Interior minister Matteo Piantedosi told the media that the operations of Humanity 1 and similarly-purposed ships are in opposition to “the spirit of the European and Italian regulations on security and border control, and the fight against illegal immigration” and that Italy can not “take on migrants picked up at sea by foreign ships that systematically operate without prior co-ordination with authorities,” per The Irish Times.

“We will never derogate from our duty to rescue people at sea, but we believe the time has come for European solidarity to finally become real,” said Piantedosi.

Meloni and her party, Brothers of Italy, were elected in September and campaigned on a number of conservative issues, including a promise to reduce the flow of illegal immigrants into the country. 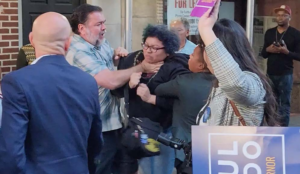