After the Buffalo Bills announced they’ll require proof of vaccination for fans entering their stadium, Cole Beasley offered to buy unvaccinated fans tickets to away games.

Starting on October 31, anyone attending a game at Highmark Stadium over the age of 12 must be fully vaccinated. There will be no option to provide a negative COVID-19 test or any permissible exemptions.

Minors under the age of 12 will be allowed into the stadium but required to wear a mask at all times.

Starting on “September 25 at KeyBank Center and September 26 at Highmark Stadium, all guests 12 and over will be required to provide proof of at least one dose of the COVID-19 vaccine to attend any event at either venue,” per WKBW.

As part of the announcement, Pegula Sports and Entertainment Executive Vice President Ron Raccuia said, “We’ve worked collaboratively with the county over the last several weeks, months, all throughout the pandemic. … We are looking to provide the safest environment for our fans that we possibly can. We’re thankful for this collaboration. We feel like this is the right move going forward.”

Beasley, 32, made the offer with teammate Reid Ferguson, 27, after fans expressed disappointment over the organization’s decision.

If you find an away game you are able to go to then I will buy the tickets for you guys. DM me names and every thing snd I’ll figure out the best way to make it happen. Wish she could witness the mafia! https://t.co/LfBdULPcmK

I hear you brother. If you can find your way to an away game this year, tix are on me 👊 #BillsMafia https://t.co/nFwpXK16wk

Beasley has repeatedly spoken out against the COVID-19 vaccine and vaccine requirements. He has even said he will consider retiring if the league requires players to get vaccinated.

He said he believed that information was being withheld from players in order to pressure them into getting vaccinated. He added that some players had been told they could be cut from the team if they do not comply and get vaccinated.

Here is the full and controversial statement from #Bills WR Cole Beasley, on vaccines and much more: pic.twitter.com/OuNyrtt7Nz

I’ll get vaccinated and be an advocate for it if Pfizer puts a percentage of its earnings from the vaccine in my wife’s name. https://t.co/2tOr9jjDaM

Beasley’s outspokenness is a departure from the team’s typical media protocol.

“Typically the Bills will look to have one person addressing high-profile topics on behalf of the organization and usually it’s head coach Sean McDermott,” notes BillsWire. “In doing so, McDermott is often very vague, but surprisingly, he has not done so when discussing the vaccine. Instead, McDermott has taken the opposite view as Beasley, going on the record to say he has been vaccinated and hopes more do the same.”

“So far, only four NFL teams — the Seahawks, Raiders, Saints, and Bills — require proof of vaccination as a condition for attendance in their home stadiums,” reports The Sun. “Unvaccinated Bills fans could travel to Miami for the Week 2 game, as well as upcoming road games against the Chiefs, Titans, Jaguars, Jets, Buccaneers, and Patriots.” 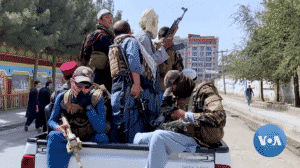 EXCLUSIVE: $64 Million in US Aid to Taliban is 'Ransom Payment for Hostages'