The media group also announced Fetterman reportedly chose to participate in only one of the two full debate rehearsals offered by Nexstar, NewsNation’s parent company.

“It is unfortunate that Mr. Fetterman is now criticizing the closed captioning process employed by Nexstar during tonight’s debate,” said Nexstar’s Chief Communications Officer Gary Weitman in a statement.

Statement from our parent company, @NXSTMediaGroup, in response to the @JohnFetterman campaign claiming he was “working off of delayed captions filled with errors” during last night’s Pennsylvania Senate debate on @NewsNation pic.twitter.com/PUT5ELfQ0C

“We are thrilled with John’s performance. He did remarkably well tonight – especially when you consider that he’s still recovering from a stroke and was working off of delayed captions filled with errors. John won countless exchanges, counter-punched aggressively, and pushed back on Oz’s cruelty and attacks,” said Fetterman’s campaign director Joe Calvello regarding the Senate candidate’s performance, News Nation reported.

Fetterman’s campaign appeared to preemptively blame closed captioning for the Senate candidate’s performance in a Monday email to reporters.

Campaign officials warned there may be “temporary miscommunications” because Fetterman’s captions would reportedly be “typed out by human beings in real time,” claiming human error was “inevitable.” The email also appeared to downplay Fetterman’s overall performance prior to his stroke citing a previous article from the Philadelphia Inquirer claiming the Senate candidate historically didn’t perform well in debates.

“We’ll admit — this isn’t John’s format,” read the email before claiming Oz held an edge against Fetterman because of his experience in television.

“The Fetterman campaign seeks to lower expectations for tomorrow’s debate with Oz,” said Politico reporter Holly Otterbein upon revealing the contents of the email.

Polls by online-based prediction market Predictit showed a drastic spike in approval for Oz following his debate performance while the Democratic candidate’s rating tanked. Fetterman maintained a lead over his Republican challenger throughout their campaigns though current polls show Oz floating around $.67 compared to his Democratic opponent’s rough $.37 rating. Prior to Tuesday’s debate, Oz had a slight lead of $.53 to Fetterman’s $.50 rating.

“My heart really went out to John Fetterman as he struggled, watching as he tried to answer that question about his flip flop on fracking was heartbreaking,” said political commentator Chris Stirewalt.

Timcast has reached out to Nexstar Media for further comment on Fetterman and the closed captioning process used during the Tuesday debate. 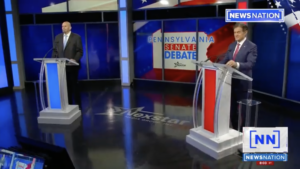 'Hi, Good Night Everybody': Fetterman Struggles To Speak In Debate With Oz