On Monday, John Fetterman’s campaign appeared to acknowledge the Senate candidate may struggle in his upcoming debate with Republican challenger Dr. Mehmet Oz.

In an email to reporters, Fetterman’s campaign staffers reportedly claimed Oz may have an edge against the Democratic candidate citing his professional television work since appearing on The Oprah Winfrey Show in 2009.

The email appears to depict Oz as a “fraud” and “professional TV performer” while downplaying the necessity of Fetterman’s accommodations regarding health complications following his stroke in May. The email further notes an article from the Philadelphia Inquirer claiming Fetterman wasn’t a strong debate performer even before his stroke.

“Let’s be clear about this match-up: Dr. Oz has been a professional TV personality for the last two decades,” Fetterman’s campaign said in an email to reporters appearing to stifle the Senate candidate’s critics. “We’ll admit — this isn’t John’s format,” the email conceded.

“The Fetterman campaign seeks to lower expectations for tomorrow’s debate with Oz,” said Politico reporter Holly Otterbein upon revealing the contents of the email.

In a memo sent to reporters, the Fetterman campaign seeks to lower expectations for tomorrow’s debate with Oz: “We’ll admit — this isn’t John’s format … if we’re all being honest, Oz clearly comes into Tuesday night with a huge built-in advantage.” pic.twitter.com/21CCMGGvbI

“This guy is a media-savvy performer who literally built his career (and his fortune) by playing to the cameras as a daytime TV host. He hosted his scammy talk show for 13 seasons, filming over 2,000 episodes where he hawked miracle cures and magic diet pills to prey on hard-working Americans,” read the email which further details Oz’s television history.

The email noted Oz’s potential talking points, including references to abortions as “murder” while criticizing Fetterman’s record on crime, inflation, and taxes. “Oz will try to play the nice doctor on Tuesday night, but his campaign’s attacks on John’s health have consistently been mean-spirited and cruel,” the email reads.

The email also noted criticism by Oz and “right-wing media” of Fetterman’s use of closed captioning technology as “malicious”:

This debate is unprecedented — there’s never been a closed-captioned political debate in a high-profile Senate race where one of the candidates is dealing with a lingering auditory processing challenge while recovering from a stroke. We are prepared for Oz’s allies and right-wing media to circulate malicious viral videos after the debate that try to paint John in a negative light because of awkward pauses, missing some words, and mushing other words together. The captioning process may also lead to time delays and errors in the exchanges between the moderators and the candidates. In fact, because the captions are going to be typed out by human beings in real time, on live TV, some amount of human error in the transcription is inevitable, which may cause temporary miscommunications at times. It is impossible to control and unavoidable.

“That’s OK — what matters is that people get to see and hear John’s values,” says Fetterman’s campaign officials. “But remember: John did not get where he is by winning debates or being a polished speaker. He got here because he truly connects with Pennsvlvanians.”

Fetterman officials noted the Senate candidate’s ability to connect with average Pennsylvanians as the true mark of a successful campaign.

“That’s what voters are going to see on the debate stage,” the email concludes. “And it’s why John is going to win this race — even if he doesn’t win the debate.”

Oz and Fetterman are scheduled to debate Tuesday night in what will likely be the only public debate between the candidates. 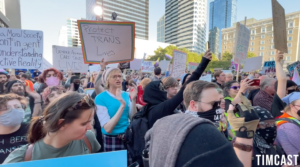