New York Rep. Jamaal Bowman was arrested outside the US Capitol building on Thursday during a protest over voting rights.

Bowman was arrested alongside almost 30 other protesters who were hunger striking in favor of the Democrat voting legislation efforts.

Bowman’s director of communications, Marcus Frias, told USA Today that the representative was “participating in a non-violent action at the North Barricade of the Capitol building.”

These are the 33 bills passed in 19 states throughout 2021 that restrict voting rights. There is a battle for the ballot box and we can’t watch it from the sidelines.

Organizers did their jobs. Now it’s time for the Senate to do its job. pic.twitter.com/mzdEnVQAvG

“The arrests came after Senate Democrats failed to pass a voting rights bill Wednesday night that the House already passed. Senators also failed to change filibuster rules to pass the bill with a simple majority,” the newspaper reports. “On Twitter, police said demonstrators began blocking one side of the North Barricade outside the Capitol just before noon. There, officers issued three warnings and demonstrators refused to get out of the way, so officers made arrests.”

As @JamaalBowmanNY engages and thanks a group of of us fighting for voting rights outside the Capitol, @CapitolPolice cuff him and put him under arrest with the group. Thanks for always standing with the people! #VotingRightsNow @LetsUnpac @peoplefor pic.twitter.com/Py2YHNAMUL

Bowman, the only member of congress who was arrested during the protest, was released on Thursday afternoon.

We made a total of 27 arrests for Crowding, Obstructing or Incommoding (DC Code § 22–1307), and one for violating U.S. Capitol Police Traffic Regulation Section 16.3 (Crowd Control).

The demonstration activity is all clear.

The Capitol Police tweeted that they warned the crowd that they needed to move out of the driveway three times before the arrests began.

Ultimately, there was a total of 27 arrests for Crowding, Obstructing or Incommoding (DC Code § 22–1307), and one for violating U.S. Capitol Police Traffic Regulation Section 16.3 (Crowd Control). 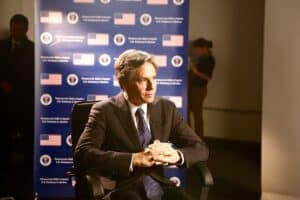 8 responses to “New York Rep. Jamaal Bowman Arrested at US Capitol While Protesting in Favor of Democrat Voting Bill (VIDEO)”