On Thursday, the New York City Council approved a measure that will allow immigrants who are not U.S. citizens to vote for mayor and other key municipal positions.

This comes as an historic move that is igniting threats of legal challenges from Republicans and hopes from Democrats that other cities across the nation will follow suit.

The council voted 33 to 14 with two abstentions on the measure that grants noncitizens significant influence over a multiplicity of elective offices. The voting rights will impact the offices of the mayor, city council, comptroller, the public advocate and the leaders of the city’s five boroughs who oversee issues like zoning.

Currently there are about 1 million adult noncitizens living in New York City. This represents about 20% of the registered voter pool inside the city. However, there is no guarantee all of these individuals will be able to vote under the new rights. To register, noncitizens must have a work permit and have lived in the city for 30 days — the same requirement for citizens. Illegal immigrants residing in the city cannot vote in the municipal elections.

Noncitizens still remain ineligible to vote for state and federal elections. Violations of the New York measure result in a fine up to $500 and a year in jail.

“The New York City Council is making history,” said council member Ydanis Rodriguez, the bill’s sponsor, who is an immigrant and naturalized citizen from the Dominican Republic. “New York City must be seen as a shining example for other progressive cities to follow.”

The vote came as the culmination of many hours of emotional debate inside City Hall among council members who recalled their own roots as the descendants of people from Africa, Italy, Ireland, Albania and Hong Kong.

Republicans from the city vowed to fight the measure in court, saying that the state constitution says “citizens” can vote. Many went on to state that New York never intended to grant voting power to people who have only lived in the country for 30 days.

However, historians and some lawyers have argued that New York’s move is likely legal because noncitizens have voted in the city and the country for more than 200 years — a trend that began in the 1700s and picked up steam after the Civil War. This is a reflection of times when the majority of the city’s adult residents were from European nations such as Ireland, Germany and Italy.

“They believed that if you gave people the right to vote, they would be invested in American society, feel part of the process,” said Hiroshi Motomura, a UCLA law professor, following the historic vote Thursday.

Applause filled the chamber after the vote, which represented a culmination of years of advocacy that sought to restore voting rights that existed for other immigrants in the past but has largely stagnated nationwide. 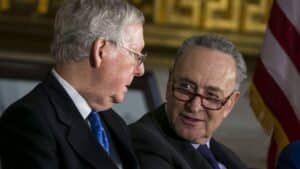