The shelter will house up to 1,000 adult men

Adult males seeking asylum in New York City will be housed at the Brooklyn Cruise Terminal as the city works to absorb the wave of migrants, some of who arrived by charter bus from border states.

More than 41,000 migrants have arrived in New York City since the Spring of 2022. Mayor Eric Adams declared a state of emergency in October and has repeatedly requested assistance from the Biden administration.

“We continue to surpass both our moral and legal obligations and meet the needs of people arriving in New York, but as the number of asylum seekers continues to grow, we are in serious need of support from both our state and federal governments,” Adams said on Jan. 21.

The terminal is now the fifth Humanitarian Emergency Response and Relief Center (HERRC) offered by the city. It will be capable of housing 1,000 migrants who need “a place to stay, access support, and get to their final destination.”

The city is also using 77 hotels as emergency shelters. The shelters and their staff “connect asylum seekers with critical resources” and enroll minors in school.

“New York City will always remain a beacon of hope for those seeking a better life,” said Zach Iscol, the commissioner of New York City Emergency Management. “The Humanitarian Emergency Relief and Response Center at the Brooklyn Cruise Terminal will aid asylum seekers as they transition into American society. Our team will continue to work with our partners to find alternative ways to support this humanitarian crisis.”

According to AP News, the new relief center’s location was not universally celebrated.

The outlet reported that “some advocates for people who need shelter criticized” the location which they believe could “flood and is ill-suited to housing people.”

Adams’ statement alluded briefly to what increased the number of migrant arrivals in New York City, saying that his government was “managing the arrival of a rapidly increasing number of buses across New York City with virtually no coordination from states sending them.”

“Instead of wasting more taxpayer dollars on HERRCs and jeopardizing the safety of migrants in need of relief, the City must utilize existing voucher programs, such as CityFHEPS, to help homeless New Yorkers move into permanent housing, thereby allowing shelters to accommodate new entrants,” said the Legal Aid Society and the Coalition for the Homeless in a joint statement. “Continuing to move asylum seekers around the boroughs like chess pieces is callous and indicative of City Hall’s failure to competently manage this crisis, and it’s especially frustrating that Mayor Adams continues to disregard the alternatives we have recommended since this crisis broke last year.”

The groups further rebuked Adams for suggesting during a Jan. 25 interview that “asylum seekers are not entitled to New York’s Right to Shelter protections.”

“Anyone in need of shelter, including asylum seekers, is entitled to such, as prescribed by multiple long-standing court orders and local law. This is not a responsibility that Mayor Adams can decide to shirk, and he knows better,” the group’s statement read.

“Because of President Biden’s continued refusal to acknowledge the crisis caused by his open border policies, the State of Texas has had to take unprecedented action to keep our communities safe,” said Abbott on Aug. 5 after the first bus of migrants arrived in New York. “In addition to Washington, D.C., New York City is the ideal destination for these migrants, who can receive the abundance of city services and housing that Mayor Eric Adams has boasted about within the sanctuary city. I hope he follows through on his promise of welcoming all migrants with open arms so that our overrun and overwhelmed border towns can find relief.” 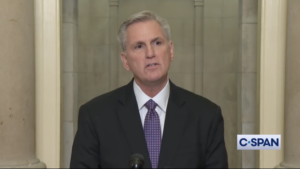 'Integrity Matters to Me': McCarthy Spars With Reporter Over Schiff, Swalwell Removal