New Study: White People Have The Lowest Life Expectancy in England and Wales

A new study from the Office for National Statistics (ONS) found that white people have the lowest life expectancy of any ethnic group in England and Wales.

According to the data, white women live 83.1 years while white men live just 79.7. Together, they represent the lowest ethnic life expectancy.  The statisticians commented that Black Africans had the overall highest life expectancy.

The ethnicities were categorized in this report as Pakistani, Indian, Black African, Black Caribbean, Black other, Bangladeshi, White, Mixed, and Other.

The study used census data to evaluate the mortality rates. The researcher wrote that they wanted “to improve the evidence around health outcomes for different ethnic groups and highlight areas where further analysis is needed.”

Black African women have the longest life expectancy (88.9 years) and Bangladeshi people have the largest sex gap, with women outliving their male counterparts by 6.2 years.

White people reportedly have a higher rate of cancer and are more likely to smoke or drink, thereby impacting their mortality rating. Cancer deaths were lower among Indian, Pakistani, and other Asian groups.

“Researchers concluded cancer and heart disease are the biggest killers, together accounting for 61 per cent of all male deaths and 53 per cent of all female deaths in England and Wales. But the proportion of deaths these conditions are responsible for varies between ethnic groups, with the figure jumping to 64.7 per cent of all black Caribbean men who died, while it dropped to 55 per cent for the ‘mixed’ ethnic group,” per The Daily Mail.

Julie Stanborough, deputy director of health analysis and life events at ONS, said “Further research is required to investigate the reasons for the differences. However, these results reveal important patterns in life expectancy and mortality by ethnic group which are complex, but nevertheless consistent with most previous studies.”

In March of 2020, Dr. Pragya Agarwal wrote that the National Health Service was inherently racially biased and that put more minority people at risk of coronavirus. She called for sweeping changes, saying “Unconscious bias will affect both NHS staff and patients, yet it is a topic that we still tiptoe around.”

Britain’s National Institute of Health (NIH) announced in June it would work to end structural racism in biomedical research enterprises. Scientists, administrators, staff, and leaders from the NIH committed to “increasing funding opportunities for projects that help to understand and address the impact of structural racism and discrimination on minority health and health disparities” in addition to “identifying and correcting any NIH policies and practices that perpetuate structural racism.” 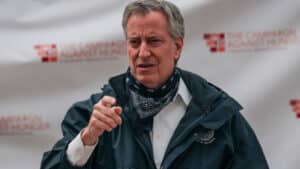 De Blasio on Vaccines: ‘We Tried Voluntary … The Voluntary Phase is Over’