Travelers from the United States entering Hong Kong will be sent to a designated quarantine camp upon arrival.

The nation implemented a 21-day quarantine requirement for most travelers. The quarantines take place in designated hotels and the travelers are repeatedly tested for COVID throughout the three-week period.

Under the new rule, travelers from the U.S. and certain African countries — like South Africa and Zimbabwe, among others — will be required to spend the first seven days in a “quarantine center” where they must submit to daily COVID-19 testing and health evaluations. If they are negative during this phase, the traveler will then spend 14 days in a quarantined hotel.

All travelers must be fully vaccinated to enter Hong Kong.

“The announcement on Friday evening marked the first time health authorities have moved a country outside Africa into the highest category of risk,” per the South China Morning Post.

The semi-autonomous city government said in its Dec. 10 announcement that concerns about the Omicron variant led to increased restrictions.

The city confirmed its fifth case of the variant in a 37-year-old man who had arrived from the United States.

“The Government will implement the most stringent quarantine and testing requirements for the relevant inbound travellers who arrive at Hong Kong on or after December 13 … in view of the importation of an Omicron case from the USA into Hong Kong,” said the press release.

“The emergence of omicron has turbocharged Hong Kong’s already extreme travel quarantine system,” reports Bloomberg. “In the last week or so, the Asian financial city has moved over 30 countries to its high-risk category, mandating that residents returning from those places serve 21 days in hotel isolation after crossing the border.”

The Hong Kong quarantine center Penny’s Bay has been compared to prison by some members of the press.

In an opinion piece for the Hong Kong Free Press, Vines wrote:

“To enforce compliance an all-seeing CCTV surveillance camera keeps a careful eye on the doors. Next to it are loudspeakers poised to bark orders at inmates making an unauthorised exit or even timorously stepping outside the door. Hazmat-suited operatives emerge at remarkable speed to chastise offenders who peek out.”

Hong Kong has implemented some of the world’s strictest COVID-19 regulations in the world. Quarantine exemptions have largely only been granted to travelers from China. 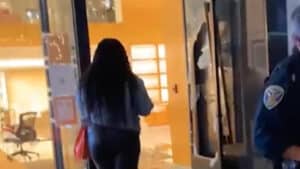