New Projection Predicts A Total of 2.1 Million Illegal Crossings in 2021

The figure comes as a carvan of migrants travel through Mexico to the U.S..

A record-high number of illegal crossings are expected to take place this year, according to a new analysis.

Using data from U.S. Customs and Border Protection, Steven Kopits of Princeton Policy Advisors predicts that 2.1 million illegal immigrants will enter the United States via the southern border in 2021.

The Department of Homeland has already shattered the previous all-time high after reporting 1.6 million crossings during this fiscal year.

“If there is anything positive to report, it is that inadmissibles — those presenting themselves without proper documentation at official crossing points — have declined dramatically in September, falling by more than half to 6,486, a level low even by historical standards.” he continued. “This suggests a material change in Customs policy which has largely curtailed the opportunity for undocumented migrants to cross into the US at official entry points.”

According to Fox News, ”a total of 192,001 migrants were encountered in September” which is about a 9% decrease from the month before.

“The administration’s open borders policy is an unmitigated disaster, most particularly for the long-term undocumented who, in our view, warrant legal status sufficient to work without fear of apprehension,” Koptis said. “Repairing the political damage may take a decade or more.”

Customs and Border Protection reports that 26% of those encountered had at least one prior encounter. This is, on average, a 14% increase from years prior.

Adding to the crisis, a growing caravan of Central American migrants has been documented traveling toward the U.S.-Mexico border. Mark Morgan, the former acting commissioner of CBP, said in an interview the caravan, comprised of Africans, Central Americans, Haitians and South Americans, will arrive in a matter of weeks.

“Morgan credited Abbot’s deployment of about 1,000 state troopers and Texas Rangers to stand guard at the border,” per The Daily Mail. He said that the additional forces “has resulted in about 150,000 migrants being detained for unlawful border crossing.” 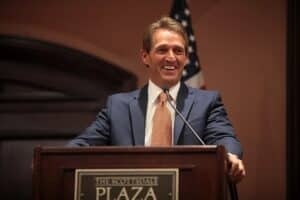