A man from New Mexico became the first defendant charged in connection with the event of Jan. 6, 2021 to be found not guilty.

McFadden also said the government failed to show evidence of Martin crossing the police line, which mobs of protestors had broken before he arrived at the Capitol.

During his April 5 testimony, Martin said he “went with the flow” as he neared the Capitol and that he was waved into the building by a police officer. The prosecution called his statement “nonsense.”

The judge, a former police officer who was appointed by President Donald Trump in 2017, noted that he believed Martin was “largely credible” although he most likely “shaded his testimony on some points, minimizing his actions.” McFadden said the contractor’s conduct was “as minimal and not serious” as he had seen in a Jan. 6 case.

“All of this would suggest to a normal person that perhaps you should not be entering the area,” McFadden said from the bench at the time. McFadden acquitted Griffin of disorderly conduct charges.

“More than 770 people have been charged with riot-related federal crimes,” reports AP News. “Over 240 of them have pleaded guilty, mostly to misdemeanors, and over 140 of them have been sentenced.”

In total, three of the cases stemming from the Jan. 6 riot at the Capitol have been resolved via trial.

So far, Martin is the only defendant to be acquitted of all charges brought against him by the government.

A fourth trial involving Virginia police officer Thomas Robertson, who was present at the Capitol on Jan. 6, is currently ongoing.

“Well, I think the definitive factor was that Matt Martin did not break the law,” said Martin’s attorney to press outside the courtroom. “And we had the benefit of a lot of video evidence and the judge had a chance to see it.” 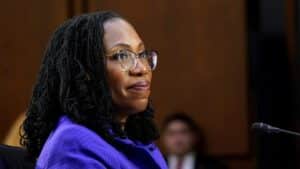